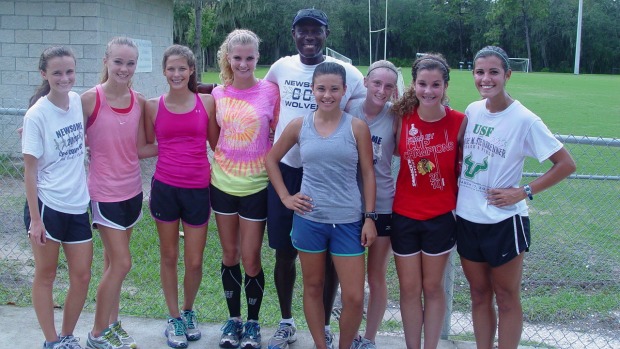 At the gateway between the Caribbean Sea and the Atlantic Ocean, you will find the small island of Barbados. The island nation is home to a little over 250,000 people, around a third of whom live in and around the capital of Bridgetown. While pockets of poverty exist today, the country has enjoyed growth over the past three decades fueled by tourism, banking, and manufacturing. As a child, Newsome coach Orlando Greene remembers the rural life he enjoyed there. Each day the former Olympian would run three or four miles to school with his fellow classmates, kicking a soccer ball along the way or simply racing.

Starting off as a Cricket player, Greene not only displayed his intensity, but also discovered his lightning speed. After being asked to run for the track and cross country team, Greene quickly found himself ahead of the pack, winning races and blowing by older kids who had been running longer than him. “I got the taste of victory, and I wanted to continue with that.”

After getting some experience under his belt, Greene began to realize what his true niche in the track and field world was, which turned out to be the 800 meter run and the Mile. “Those were my two races, and I was for sure going to be in there to win.” And win he did. Quickly soaring to one of the top athletes in his school and Barbados, Green began noticing the strong backing he was getting from his village, including his teachers and peers. With his newfound popularity as an athlete, Green sums up his motivation into these words, “I could not let down my people; it was who I was representing.” 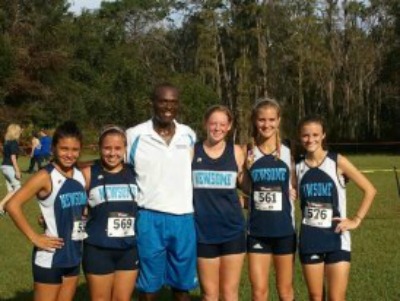 After reaching his high school best of one minute and fifty-two seconds, Greene found himself being heavily recruited from universities throughout the United States, where he later found himself at Seton Hall University in New Jersey under Coach John Moon. Greene, who describes Moon as a tough old army guy, was a major factor in the Barbadian’s growth. “He did not want my talent to fall by the wayside. I kind of thank him years later, even though he pushed me hard. But he stayed with me.” Already accustomed to the high competition from the Caribbean, Greene took on his new college atmosphere in stride, setting a school record in the 800 that has yet to be broken, and becoming the 1973 NCAA indoor champion in the 1600 meter event. Three years later, Greene found himself participating in the 1976 Olympic games in the 800 and 4x400 relay in Montreal at the age of twenty-three.

After the Olympic games, Greene quickly began getting offers from various sponsors, such as Reebok and Nike. Throughout his professional career, Greene dropped his time down to a scorching minute and forty-four seconds, which still stands as the Barbadian record. Although it seemed as if the 1978 Olympics was a shoe-in, Barbados boycotted the games along with the other US Allies, cutting his aspirations at Olympic glory short.

Finally reaching his peak, Greene retired from his running career in 1980, in which he jokes, “I just got old!” During his seventeen years spent in the Caribbean coaching and sending athletes to universities all over America, Greene became one of the coaches for the Barbadian Olympic team in 1984, where his 4x400 meter relay team qualified for the finals. Greene also played a major role in Andrea Blackett’s and Obadele Thompson’s Olympic careers. Blackett, a 400 meter hurdler who was one of the world’s top runners at one point, participated in the 2000 and 2004 games. Thompson in turn ran in the 2000 Olympics, claiming a bronze medal in the 100 meter dash.

Many of his athletes would describe Greene as energetic, optimistic, but also tough. Teaching that having a positive and “never say die” attitude are essential to the sport, Greene’s love and passion is reflected through his coaching methods and the attention he pays to this athletes. “I just love what I do.” He states with a smile.

Even though he now lives in the suburbs of Brandon, Florida, Greene has never forgotten about the country he grew up in and continues to support through helping the Barbadian natives get recruited to colleges in the U.S. “I want to give them the same opportunities I had.”

Growing up as an only child with his two parents, the Greene’s survived off of yams, potatoes, and cow’s milk. “It was tough, it wasn’t easy. My family basically had nothing.” Using his experiences of growing up in a poverty stricken area, Greene emphasizes to all of his athletes that passion, hard work, and will are the tools to overcome the wall that seems impossible to climb over. “You’re a better person once you get on the other side of the wall, you just have to figure out whether to go over it, under it, or around it.”

Coming to the States with virtually no money and a suitcase of clothes, Greene points out that his story is not much different from other athletes in the Caribbean. Although there were many different trials that had to be overcome, Greene states that he wouldn’t change a thing about his life. “I look back on my life and I think of a young, skinny kid from a poor neighborhood, being able to rise up through the ranks and travel all over the world. I now have a job I am happy with, I have food, and a family I love and care for.”

Greene’s story is one that marks the true greatness and potential that people have, whether they are from a small island that many have never heard of, or a big city. Although through out most of his life there were obstacles and odds that were overwhelmingly against him, Orlando Greene is a living example of how hard work, determination, passion, support, and the will to win are the keys to rising from a world of nothingness, to greatness.