We all have a purpose. We all have dreams and desires and no matter how big or how they small they might seem, we all want something. Some people fall in love with football, dancing, or writing, but me, I fell in love running. Don't ask me why, but I just love what I do. Like most normal runners, I was definitely not amazingly gifted or talented. I was a tall, average built, dorky freshman who got roped into running cross country by her best friend. Freshman year, my old coach had me running ten miles or less a week, we never did hills, and I ran a 29 minute 5K on a good day. My goal was always to just not finish last. The summer before my sophomore year I upped my mileage to 20 miles a week just because I felt like it. I really didn't even think about getting good or winning anything, it was just something I liked to do to. My sophomore year, I'll never forget what the boys' coach, who is now my coach, said the day before my first race of that year. He said “You don't even know how much better you've gotten.” The next day, I put on a pair of spikes for the very first time and got on the starting line prepared to just go out there and run. There was no plan, no set splits, just run. I wish I could tell you what was on my mind during the race but all I really remember is finishing, looking up at the clock and seeing 21:59 which was 8 minutes faster than last year. I finished 15th that day and got my very first medal. I looked down as the medal was placed around my neck and felt the indent of the letters that read “Mount Dora Bible Invitational” that had been engraved on the back of it. In that moment, I engraved my own promise onto my heart and decided right then and there that from this point on, I would not quit and I would continue to run until I could be the very best I could possibly be. 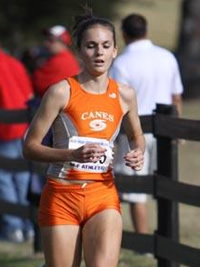 Two years later, and I can't say much about me has changed. My name is Ashley Heitling and I am a senior at Mount Dora High School. I can honestly say I worked harder this summer than I have ever in life. I ran hills pretty much everyday, lifted weights three times a week, kick boxed, and did other forms of cardio in addition to running on the days I didn't lift. I would sometimes close my eyes in the middle of my long runs, my face covered in sweat from the scorching summer heat of Florida and imagine the upcoming season, state championships, medals, the races, you name it. At the beginning of the season, I won my first race and everything was going as planned until my second meet, which was the UF Mountain Dew Invitational. I was feeling stronger than ever and was in the lead pack when I charged up a hill right before the two mile mark and felt an excruciating pain in my right foot. I hobbled along and did my best to stay up, but I quickly went from being 3rd to 60th in a matter of three minutes. I just wanted to finish, but I knew you could see the pain that had struck across my face like lightning as my right hand tightly clutched my right quadricep in hopes that the firm grasp I held on my leg would keep my mind off my foot. My coach caught up with me and called me off, and after talking with him briefly, in a stubborn attempt to not let anyone know how bad it really hurt, I hobbled back to the parking lot trying to walk normal and keep my head up like nothing happened.
The following Monday, I went to a sports medicine doctor in Orlando with strong hopes that it was just inflamed and at the very least it would take a week or a few days to heal. I got an MRI done and waited as patiently as I could for the results. My doctor came back in the room with a blank expression on his face. I on the other hand, caught up in what I thought was a relatively minor injury, decided to sit there and smile optimistically. He looked at his clipboard and back up at my face, shook his head, and gave me the look like you're about to tell someone they have a terminal illness and said “You partially tore your plantar fascia tendon.” I looked up and said “Okay. So what are we going to do about it and how long does it take to heal?”. I honestly could have cared less about the scientific aspect of it, I just wanted to know when I could run again. He pursed his lips and said “Just keep icing and taking ibuprofen and you should be fine in...” He hesitated. “..four to six weeks max.” My optimistic demeanor had just taken a detour down the road of misery and my whole attitude changed. I looked at him in the same kind of disbelief I did when I was a child and my mom told me that Santa Clause didn't exist. About 15 seconds later, the news hit me like a cement brick that had been thrown in my face. In four to six weeks, my season would pretty much be over. I looked at him, and said “I'll go crazy,” but all he said he was sorry and that I would be in a boot for the remainder of the healing process. I looked at my mom, looked back at the doctor as he walked out the door, and felt my stomach drop to the ground as tears welled up in my eyes the size marbles. I couldn't fight them anymore, It was over. I dropped my head into my hands in a sweet surrender as they placed the boot on my foot. I felt the salty water from my eyes continuously streak across my face like a summer downpour that just won't let up. I felt myself becoming emotionally and physically defeated. 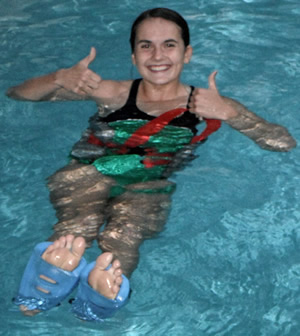 I went home, collapsed on my bed and looked up at my pegboard on my wall, which I call my “Dream Board” because on it are pictures and goals for the season and for my life. I looked up I saw the words “Quitting is never an option.” I scoffed at the encouraging words, grabbed a pen, and in anger, marked out the word “never” so it read “Quitting is an option” just to make myself feel better. After having my hour or so long pity party, and several hard days to follow, I realized that I needed to come up with a plan. I was still cleared to aqua jog and also to follow my regular lifting routine. It has been difficult, especially because the pool isn't heated and is on average 78 degrees even with the sun out. The workouts aren't as fun either because you hardly even move. I could come up with a hundred reasons why I'd rather run instead of aqua jog but that isn't the point. The point is, I have to make the very best out of the situation. The hardest part is when people come up to me and asked what's happened and I have to relive the experience all over again, or when I have to go to meets I was supposed to run in and feel my heart sting as the gun goes off knowing I should be on the starting line with everyone else. It's easy to get discouraged and feel like you've lost everything when really, you can use it  as an opportunity to strengthen a part of yourself you never even knew you had.
“Quitting is never an option” has continuously echoed through my head this past month and I never fail to remember it when I feel like giving up. So many times I've just wanted to say forget it and just start getting ready for track season, but that's too easy. I'm a long distance runner because I live for challenges and the difficulty of fighting for something when you feel like you have nothing left, and this is definitely one of the hardest challenges I've ever had to deal with. I never would have thought I would have to sit out  50 percent of my Senior year cross country season but sometimes that's just what life throws at you and that's when you fight back. Five weeks later, and I can finally see a light at the end of the tunnel. My foot is getting better everyday and am almost back up to 100 percent. I still have people at school ask me what happened and I pretty much know the story by heart. One girl at school asked me just a couple weeks ago if I was done running forever. If you would have asked me that a month ago I might have said yes but instead I looked up at her and just laughed. I said “Put your hand on my chest. Do you feel that?”. She looked at me like I was crazy and asked “Your heartbeat?” and I said “Yep.” “What about it?” she asked. I looked at her as seriously as I could and said “You can take away my legs, you can take away my ability to run, but as long as my heart is beating, I will never give up and I will never lessen my goals or walk away from my dreams.”
As runners, we push ourselves as hard as possible in hopes that the end all the pain was worth it. In life, it's just one big long race that's over before we know it filled with obstacles and victories. The victories are more rewarding when we realize the struggle we had to overcome to get there. Being injured or having setbacks is the same way. The difficulty you face now is just a set up for something greater to come in the future. My sophomore year I promised myself I would never give up until I became the best I could possibly be and I will keep that promise no matter the circumstances. Victories are nothing if you can't stay strong through the losses. My heart still beats with the same passion and love for running it did when I won my first race sophomore year. I know that the greatest letdowns can give rise to the greatest victories and because of that, as long as my heart is still beating, I will never quit and I will never lessen my goals or walk away from my dreams.