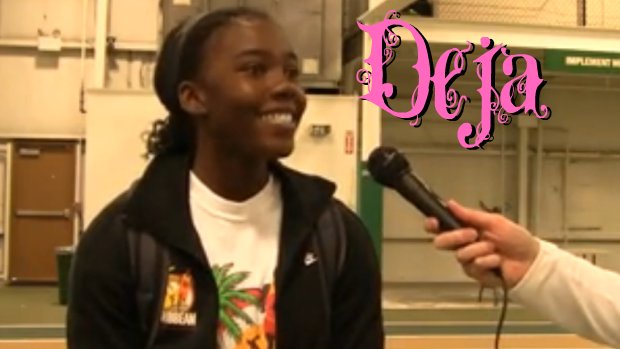 American Heritage junior Deja Parrish and Maclay senior Stefanie Kurgatt made the long trip up to Winston-Salem, North Carolina for the NCRunners Elite Holiday Invitational. The meet was held at the new JDL Fast Track indoor facility and sponsored by our MileSplit sister site, NCRunners.com.

Parrish, who says she has been on the track training since October, opened the 2013 track season with a fantastic 57.13 victory in the invitational division of the 400 meter dash. It was her second time at an indoor meet and she plans to add two more indoor outings before starting outdoor. She will compete at the Jimmy Carnes meet in January and then the Brooks PR Invitational in Seattle in February.

While on the trip, Deja and her family stopped by the University of North Carolina. According to her Twitter page, the junior says she absolutely loved the campus there, along with the southern accents! Could this be her future college home? Perhaps so. But if she comes anywhere near her lofty goals of 52 seconds this year and 51 by her senior season, she will be able to write her ticket to any college she chooses.

Parrish says she's excited to get on the track with her American Heritage teammates this year to try out that 4x400 relay team and silence naysayers by defending their team state championship, despite some controversy over the summer and fall.

Meanwhile, Stefanie Kurgatt, who missed the entire cross country season with an injury, did not have quite as stellar of a track debut as she hoped. However, with the long absence the fourth place 5:19.97 in the invitational Mile division is not too shabby for a rust buster! The Georgetown University commitment will be looking to get back into the form she saw last spring/summer and press into the sub-2:10 800 meter and 4:4x range for the 1600.