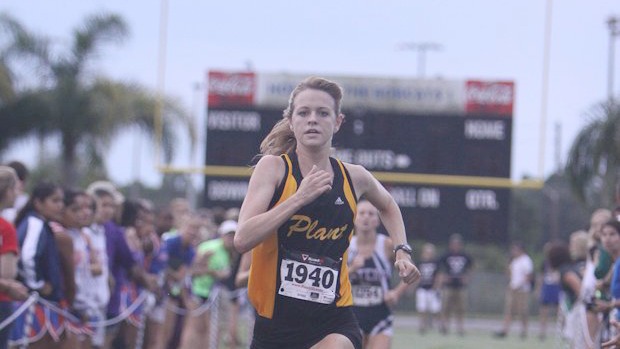 Scarlett Fox wasn't always a runner. She played soccer for ten years before her dad urged her to give track a try during her sophomore year at Newsome High School. She quickly became close with the boys and girls team as well as Coach Greene, who she says sparked her passion for the sport. 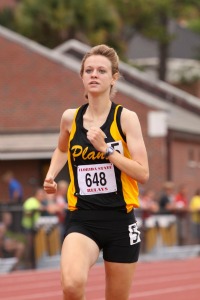 Following her sophomore season, she transferred to Plant High School and began to take running more seriously and ending her soccer career. She joined the cross country team and says thanks to Coach Harrison felt right at home.
"If it weren't for Coach Harrison's willingness to take me in, training, and intensity, I would not be in the position I am in. I will never be able to thank him enough for his commitment to this team. He gets up earlier than we do Saturday mornings, puts together a well thought out schedule, and runs his work outs with an enthusiasm that is hard for most high school coaches to match. I am so blessed to be a member of the Plant team and will always remember these years."
That hard work and dedication has seen Fox go from a soccer standout to one of the top mid distance runners in the state. Recently, the Plant senior went on recruiting visits to the University of Florida, Jacksonville University, Ole Miss, and an unofficial to South Carolina. She says when they drove around the campus of Ole Miss in Oxford it felt as if she was looking at her future home not just another college campus.
"When we were eating dinner with the team and sitting in the lounge talking with Coach Dawson and the other hosts, I felt like I was with my team. Both Coach O'Neal and Coach Dawson were so sincere while we were on the trip. After talking to each one on one, I felt that they were both people that would take me seriously as an individual and cared about my overall improvement as a student, athlete, and a person."
Joining Fox in Oxford will be fellow Floridians Kacy Smith and Katy G. Solis of Estero. The Rebel coaches have also done a great job of recruiting the south by getting some of Georgia's top female harriers. She says having a great recruiting class to come in with and having teammates who will constantly push her to be better was another factor in her decision.
"I met Annie (Kelly) on my visit as she was there to show her family the school and after talking to someone as good as she is I started to think seriously about what I was walking into, not to mention Katie Solis's and Kacey Smith's decision to sign. After my dad and I had a long conversation about it, I knew I wanted to be a part of an environment that would push me hard, and the only way to do that would be to walk in with people that are better than me."
Track and field as well as cross country are a pair of sports that she considers herself a newcomer to. Not having as much experience as some of the other girls she races against is something she doesn't see negative. She loves the feeling of coming into a race and knowing that there will be room for improvement.
"I am able to look at running with a fresh perspective, which is important as I have learned from playing competitive soccer for ten years. With my new found passion for running and eagerness to learn, I cannot wait to attend Ole Miss. I feel so blessed to be able to say that I will be a member the Ole Miss family. I am so thankful to God, my family, friends, and team for helping me get to this point."