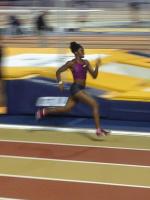 Track & Field Top 50: Girls 400m Dash...
Tamani Wilson of Lincoln and Janaya Chambers of Stanton Prep are no stranger to each other. The duo went head to head at the FSU Relays with Wilson winning out, but Chambers captured the 3A crown at t...

Track & Field Top 50: Girls 200m Dash...
Symone Mason's personal best of 23.07s for 200m is not only the top returning time in the state, but the fourth fastest in the nation of those competing in 2016. Mason is joined by Twanisha Terry, Alf...

Lincoln Quarter-Horse Tamani Wilson On Her Way To Ohio ...
Lincoln senior Tamani Wilson, one of the top 400m runners in the state as well as the nation with a personal best of 54.17 has committed to Ohio State University. We caught up with her to talk about t...