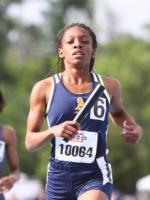 Breaking Down The Girls 100m In April Over The Last 8 S...
April has historically treated girls 100m sprinters well...

Top 25 Final Rankings: Girls Sprints/Hurdles...
Who ended the year in the top spot? Find out in our top 25 final rankings for girls sprint/hurdle events....

Damion Thomas Golden At Brooks PR, Steele Sets New Stat...
Florida standouts made the trip to the pacific northwest and Seattle for the 2015 Brooks PR Invitational and came away with medals as well as new PR's....

Win And You're In: Who Will Punch Their Ticket To The G...
The 2015 Golden South Classic will give runners one last opportunity to punch their tickets to the Dream 100 and Dream Mile in New York City. We preview the girls 100m dash and the top candidates to e...