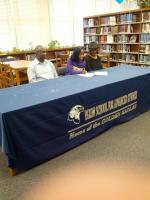 Salute To Seniors: Cedrina Singletary - Paxon School Fo...
The 2014-2015 school year has provided some great highlights in both cross country and track across the Sunshine State. In the coming weeks many of our seniors will head out to start their college car...

Win And You're In: Who Will Punch Their Ticket To The G...
The 2015 Golden South Classic will give runners one last opportunity to punch their tickets to the Dream 100 and Dream Mile in New York City. We preview the girls 100m dash and the top candidates to e...

2A Region By Region Virtual Meets...
The 2015 state championship is less than three months away. Although the season has yet to begin its never too early to start predicting what we think will happen. Take a look at a region by region vi...