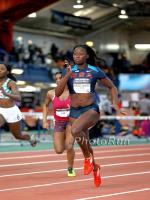 Florida Olympians Share Opening Ceremony Moments...
The state of Florida is well represented at the 2016 Olympic Games in Rio De Janeiro, Brazil. From the high school ranks, to those who went to college here, and call the Sunshine State their trainin...

Ten Florida Athletes To Represent Team USA At NACAC Cha...
Someone asked me today when does the track season and the summer end? My response "it ends?" With the Olympic Trials in the books many of those same Florida athletes who competed at Hayward Field at t...

Alumni Report: Kali Davis-White Clocks PR's & Olympic A...
The 2016 Seminole Invitational gave us a chance to see some of our favorite Florida alumni in action including former Boyd Anderson standout Kali Davis-White now at the University of Tennessee. Davis-...

Teahna Daniels 60m National Champion, Fastest Freshman ...
Teahna Daniels came into the 60m finals of the NCAA Indoor Championships with the second fastest qualifying time. She left the Birmingham Crossplex in Alabama Saturday as a national champion and the f...