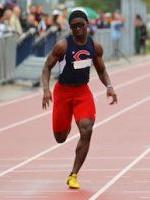 Track & Field Top 50: Boys 100m Dash...
Cocoa senior Chauncey Gardner clocked the fastest 100m time in 2014 when he ran a wind-aided 10.38 to win the 2A state championship. With Gardner graduating early and enrolling at the University of Fl...

Golden South Boys 100m Preview: Can Anyone Catch Quinn?
Devin Quinn of Port Charlotte headlines a very competitive field at the 2015 Golden South Classic. The winner receives an automatic bid to the Dream 100 in New York City. Check out our preview of the ...

Road To State: 4A Meet Preview...
The state's largest classification 4A will hit the track a UNF on Saturday. Ricky Quintana previews all the action!...

In His Own Words: Amir Rasul - From The Gridiron To The...
As a two-sport student-athlete, I never really have an "off-season". Some of my comrades in the sports world understand this quite well. However, I have grown to understand my body and how to calm it ...