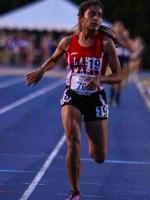 Salute To Seniors: Fatema Jaffer - Lake Mary High Schoo...
The 2014-2015 school year has provided some great highlights in both cross country and track across the Sunshine State. In the coming weeks many of our seniors will head out to start their college car...

By The Numbers: Which Senior Girls Have Improved The Mo...
We wanted to see how the top senior girls in the state have improved since they were freshman. To do this we took the top seniors of 2014 and looked at each of their season bests since 2011. The theor...

Combined Florida Results: All Foot Locker South Races...
Lake Mary senior and FSU signee was Florida&#39;s top girl finisher at Foot Locker South with a 29th place showing, while Steven Cross crossed the line in 15:01 with Nick Diaz hundredths of a second b...

WATCH: FACA Senior All-Star Meet Girls Race...
Lake Mary&#39;s Fatema Jaffer won the girl&#39;s race at the Senior FACA All-Star Meet in 18:14.34 just shy of a new personal best. Despite her win it was the North squad that took away the team title...

FACA Senior All-Star Girls Virtual Meet...
The top 32 senior girls from across the state will run one last cross country race in the Sunshine State at Lake Nona High School in Central Florida. The East team looks like the squad to beatwith the...