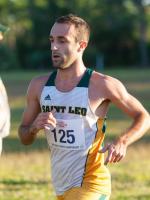 Mens Alumni Rankings: Brumfield Boasts Bests In LJ, TJ...
Keep it locked on FLRunners.com every week to see how former Sunshine State standouts are doing at the next level....

Salute To Seniors: Anthony Deleva - Coral Glades...
The 2013-2014 school year has provided some great highlights in both cross country and track across the Sunshine State. In the coming weeks many of our seniors will head out to start their college car...

TKA Lions Invitational Recap...
The TKA Lions Cross Country Invitational is quickly becoming a major early season invitational meet for the area. A well-deserved reputation for a well-run meet has begun to draw schools from around t...

Deleva, Cruz Top Fast Fields At 4A Region 3 Meet...
Dawn broke on South County Regional Park overcast and cool. The temperature at race time was around 70, and the wind was light and from the east- not likely to affect runners on the North/South aligne...