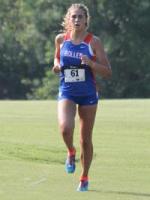 Salute To Seniors: Mackenzie Wilson - The Bolles School
The 2015-2016 school year has provided some great highlights in both cross country and track across the Sunshine State. In the coming weeks many of our seniors will head out to start their college car...

Track & Field Top 50: Girls 3200m Run...
If the 2015 version of the FSU Relays is any indication, Florida's fastest two-miler will be determined in Tallahassee. That meet saw four runners under 10:48 lead by Winter Park's Rafaella Gibbons wh...

Who Won The Week? Top 500 2A Girls...
For the second straight week Caitlyn Collier of Bolles has posted the fastest time of the postseason for 2A. Her 18:28.30 to win 2A Region 1 was over seven seconds faster than Alyssa Pujols of Pine Cr...

Katie Caples Elite Virtual Meet/Preview...
The highlight of the 2015 Katie Caples Invitational will be the girls and boys elite races held under the lights Saturday at Bishop Kenny High School in Jacksonville. Take a look at our virtual meet t...