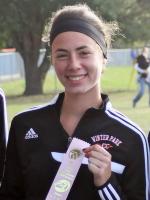 Nationally Ranked Gibbons & Winter Park Kick Off Season...
The 2015 Deland Invitational promises to be one of the best in the meet's history with over 20 teams including the Winter Park girls. We will have on-site coverage including photos, results, and a rec...

XC Spotlight: Emily Nix - Winter Park...
Emily Nix was an integral force in Winter Park&#39;s 4A runner-up finish in 2013 as a sophomore. Nix was 10th individually and looks to improve on that finish in 2014. She recalls her earliest memorie...

Scouting Reports: Winter Park Girls...
When you look at the 4A rankings, Winter Park girl&#39;s cross country team comes in at number eight. However, the list doesn&#39;t take into account transfers and incoming freshman so you can throw t...

Winter Park Cross Country Trio Among School's All-Time ...
In a school filled with running tradition, this year could go down as one of the best for Winter Park’s girls cross country team. (via Orlando Sentinel)...