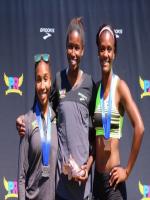 Head Of The Class Senior Girls Rankings: Steele State's...
Pasco senior and University of Miami signee Alfreda Steele swept the 100, 200, and long jump at the recent district championship. Can she sweep all three at the state meet? She's one of the top senior...

Pasco Invite Featured Photo Album: Alfreda Steele's Las...
Jim Weber was on-site at the Pasco Invite and captured over 300 photos of all the action including this one of Pasco star and University of Miami signee Alfreda Steele competing in her last home mee...

Girls Indoor Leaderboard: Osceola's Domonique Turner Cl...
Osceola senior and University of Tennessee signee Domonique Turner placed fourth in a loaded 60mH final at the David Oliver Classic this past weekend in North Carolina. Her time of 8.66 was the fastes...

Top Ten MUST SEE Videos From Jimmy Carnes...
In case you couldn't make it to the 9th and final version of the Jimmy Carnes Indoor Meet we put together a list of some of our favorite races.  From meet records, nation leading marks, world youth r...