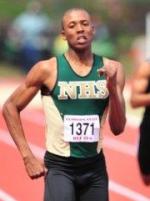 Jimmy Carnes All-Time Bests: Boys Sprints/Hurdles - Not...
I've seen numerous great races in my time covering high school track in Florida, but Marvin Bracy's 6.08s 55m dash at the 2012 Jimmy Carnes was perhaps one of my favorites. Bracy, who now runs for Adi...

Jimmy Carnes All-Time Top Bests: Boys Sprints/Hurdles...
Arguably the best race ever at the Jimmy Carnes Indoor Meet was Marvin Bracy's 6.08 in which he claimed the 55m dash high school national record. Looking at the names on the all-time sprints/hurdles l...

Alumni Report: Week Of September 8- September 14, 2014...
The college cross country season is already two weeks in. See how former Florida runners fared on the next level at meets from around the country. It&#39;s our Alumni Report for the week of September ...

UNC Sprinter Ceo Ways Quickly Making Name For Himself...
Ceo Ways, a UNC freshman who has already run some of the fastest 200- and 400-meter times in school history, has Olympic aspirations. (via www.newsobserver.com)...

Looking Back on 2013, A Year in Review...
2013 has come and gone with some major performances as we ring in 2014 we will be taking you back throughout the year to commemorate some of the bigger runs of the year! Thank you for making this yea...