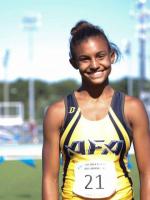 NBNO Recap: Florida Athletes Come Home With National Ti...
Florida's best headed to North Carolina for New Balance Nationals Outdoor, a chance to prove they are the the tops in the nation and earn All-American honors. Check out our day by day recap of all the...

Road To State: 1A Meet Preview...
The 2015 FHSAA Outdoor State Finals kicks off Friday in Jacksonville with class 1A/2A. Ricky Quintana gives us a preview of the state's smallest classification....

Admiral Farragut BlueJackets De-Throne Mighty Holy Trinity
The Melbourne Holy Trinity team has had a stranglehold on Class A Region 3 for the last few years. The Holy Trinity boys have won the last three, the girls, the last two. Thursday ushered in a regime ...

Premier Balance Of Academics & Athletics Makes Stanford...
The decision is in for Admiral Farragut senior Brittany McGee. One of the state's top hurdler/jumpers and defending state champion in the 100 and 300m hurdles has decided to commit to Stanford Univer...