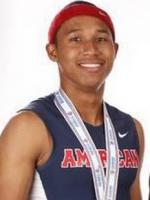 Salute To Seniors: Brandon 'B' Damon - American High Sc...
The 2013-2014 school year has provided some great highlights in both cross country and track across the Sunshine State. In the coming weeks many of our seniors will head out to start their college car...

Behind The Lens: FHSAA State Finals Best Photos...
Every week we get hundreds of photos from fans, volunteers, and contributors. Each week we are going to feature these photos to show our appreciation for the hard work and support you give to flrunner...