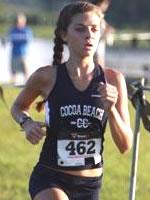 By The Numbers: All-Time Girls & Boys Bests At Disney C...
Over 5,500 athletes are entered in this weekend's Disney Cross Country Classic. We take a look back at the best girls and boys performances in meet history!...

Salute To Seniors: Shelby Davidson - Cocoa Beach...
It was a great 2011-2012 in both cross country and track across the Sunshine State. Many of our seniors will soon be on their way to start their college careers both athletically and academically so w...

Scholar Athletes: Does Running Make You Smarter?...
Last week the FHSAA held a celebration for this year’s top Florida scholar-athletes at the Academic All-State Awards Banquet, which took place on June 18th. The banquet brings together 12 male and 1...

Cocoa Beach Senior Recognized With Scholarships...
Cocoa Beach senior Shelby Davidson won a state championship in cross country and followed it up with one more state title in track and field. Davidson won the 3200 meters at the 2A State Finals. In ad...

FHSAA All-Academic Team Named: 22 of 24 are TF or XC At...
We already knew we had the BEST kids in the state competing in our sport. And we were already SO proud, but shoot! In reviewing the list of the FHSAA Academic All-State Team we see a lot of familiar n...