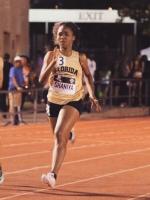 Southridge's Mason, Johnson, Key To Miami's Signing Cla...
The Southridge Spartans boast three of the top female sprinters in the country in Shaniya Williams, Symone Mason, and Kayla Johnson. Mason and Johnson will continue their college careers as teammates ...

In Photos: Florida Athletes Take Center Stage At Great ...
Several of Florida's top athletes headed out west to New Mexico for the Great Southwest Classic. Our team was on-site with top notch video and photo coverage. We wanted to spotlight our Sunshine State...

Super Seven: GMAC Championship Races You Can't Miss...
A week in South Florida doesn't go by without state leaders, nationally ranked performances, and wire to wire finishes. The GMAC Championship might have taken place on a Tuesday, but it had all the fi...

Girls Results Merge From GMAC North & South Qualifiers...
Miami Northwestern junior Twanisha Terry was first in the 100 and second in the 200m at last year's GMAC Championship and is the top seed in both coming into Tuesday's championship. She'll be tested b...