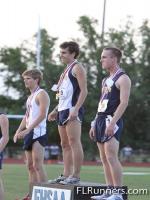 Don't Stop: David Kilgore's Road To Top 50 Finish At Bo...
Don't stop. It's a popular saying around run clubs in South Florida and throughout the U.S. For former Holy Trinity distance standout David Kilgore, it's a motto he lives by everyday....

Holy Trinity Alumni David Kilgore Crushing Marathon Sce...
We caught up with him recently to talk about that transition, his recent success, and the upcoming Miami Marathon....

David Kilgore: From Buffalo to Gator and Everything in ...
David Kilgore. Does that name ring a bell? Some people may remember him from his days as a state champion in the 1600 meters and 5000 meters as a talented distance runner for Holy Trinity. Others may ...