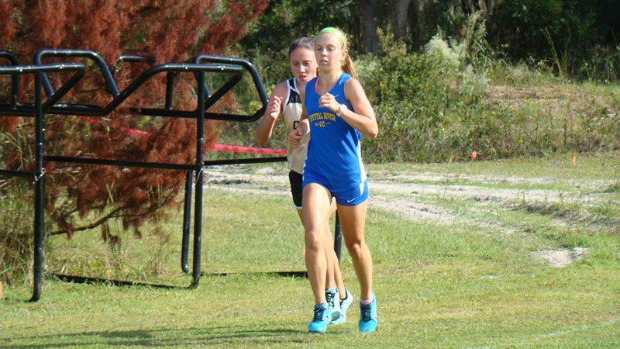 What was your most memorable race?
My most memorable race was my very first cross country race ever. It was this year and I just remember starting in the middle of the pack, running at a good pace. Then all of a sudden all these girls kept dropping off, and soon I was in the lead. I just thought to myself if I can just kept this pace I can win. Sure enough I didn't slow down and I won. Also, afterwards I found out that I broke the school record, with a 19:55. I was so ecstatic and a bit shocked. This first race turned into such a memorable season.
Who would you consider your biggest competition? 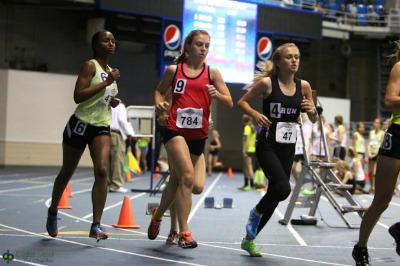 Well this year was only my first year of cross country and my third in grack. Throughout this year of cross Ccuntry I formed many friendships not only with my teammates but also with my competitors. It was one of these competitors that pushed me to running my very best, Alyssa Weber (Citrus High School). She was neck in neck with me the entire season. This rivalry during the season has translated to an awesome training partner. We feed off each other and she'll help me prepare for my upcoming college season.
What was your greatest accomplishment?
My greatest accomplishment has been getting over my ACL surgery my sophomore year of high school. It is actually the reason I joined track. After taking six months off from soccer (my primary sport at the time), I desperately needed to get back in shape and I thought what wouldn't be a better way to get back in shape then join a sport that is solely running. At the time that was the only purpose for the sport, and I wasn't very good at it. However, I feel in love! I kept running, and running, and running, but cross country was never a possibility until this year due to conflicts with soccer. My coaches kept begging me to come out and finally this year it worked out. I trained a lot over the summer. My first race, I broke the school record, I ran a 19:55, then the next race I broke it again (19:40). That's when I realized that I was actually pretty good and that I wanted to possibly pursue it at the next level. Needless to say if I never tore my ACL and worked hard rehabbing it, I would've never joined the sport that I now love so much! 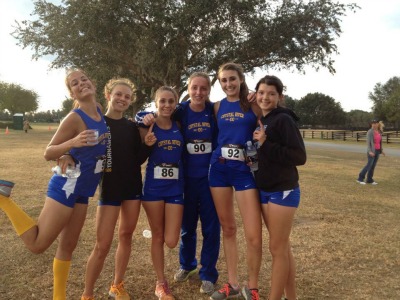 If you could do it all over again what would you change about your running career in high school?
This is an easy one for me. I wished I would've joined cross country sooner, but I guess it made for a great senior year.
What were the most difficult obstacles you had to overcome?
The mental side of the sport. When I ran those first two races there was no expectations, I was just going out there and enjoying the moment and the sport. However, after those first two races I put so much pressure on myself to perform and it effected me negatively. When I got to states I just told myself I'm just going to do my best and let God do the rest and whatever happens, happens. I ended up running a good race and finishing the season strong. I'm going to have to work on the mental aspect as I mature as a runner.
What will you miss the most?
My coach, Coach Carter and my awesome teammates, Marin Williams, Kristen Dunlap, Chloe Lane, Elizabeth Bruty, and Alexis Ulseth. The seven of us were a family and it was a pleasure being able to spend the countless hours and miles with them. Then going to states as a team was the cherry on the top, especially in my first year.
What advice you would give to younger athletes? 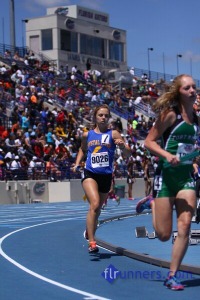 To always give a 110% no matter what. There are so my kids out there, for whatever reason, who would give anything to be able to play sports. Also that hard work pays off. If you are willing to put the time in the results will show.
What influence has your coach had with respect to your performance and overall life goals?
Coach Carter has been the biggest influence on me as a runner. She pushed me through workouts and always encouraged me. We have shared many tears, triumphs,and laughs together. She is also the one who kept trying to get me out to run cross country and told me I could make it as a college runner. She was right. She has also been such a great role model for me and I could only wish to be half the woman she is. I'm going to miss her so much.
What are your college plans?
Well I was going to play soccer at Stetson University, but after running this cross country season, falling in love with it, and talking to the coach there, I have decided to run cross country there instead, I love the school so much. Go Hatters.
Who would you like to say thank you to?
I would like to thank God, for blessing me with the ability and talent to run; my parents and little brother, Gunnar, who have supported me in every decision that has brought me to this point and beyond; and lastly my coaches, Coach Carter and Coach Byrne who have pushed me in every way and helped me realize my potential.
Is there anything else you'd like to add?
It has been a tough, roller coaster of a journey the past four years and the last one in particular, but it has been so worth it and I wouldn't change it for the world. I cannot wait to see what the future has in store for me and all my fellow runners. We aren't just runners, we're a community! Farewell Crystal River High, hello Stetson University! Congrats to the rest of the 2013 graduates and I wish you best in your future endeavors.