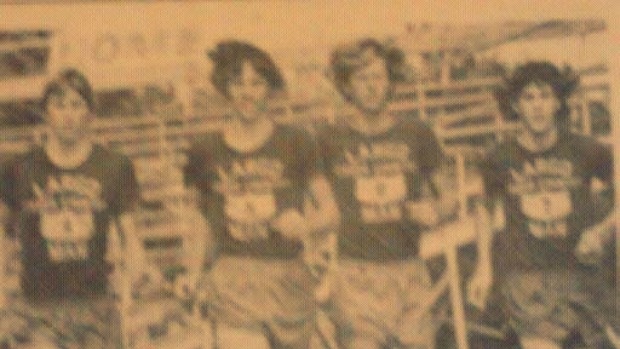 It was in 1968 when the late Jack Nason become the 1st Florida Prep to crack the 9:30 barrier. Then 2 years later 2 of Florida's best graduating Seniors, battled it out at the Atlanta Classic with Bobby Brooks fending off in state rival Mark O'Brien running 9:13.8 & 9:16.0 respectively finishing 1 & 2, vastly improving on Nason's best and obviously breaking that 9:20 barrier!
In another 2 years, at the end of the '74 track season, 7 more runners from, 5 from Pinellas County schools would enter the fray of which 2 would hail from Largo HS, the amazing Gary Funkhouser, who ran with a back brace for most of career and Ed Palmer, Kevin Holzwart of Bishop Barry, later known as St. Pete Catholic, Tim McClain of St. Petersburg HS & finally Lee Albright of Seminole. The 6th runner, Terry Crews, was from Chamberlain in Tampa & the 7th member was Rickey Golden from Palatka South HS. These gentleman collectively won 5 state titles between them, only McClain & Albright missed out. These runners would put themselves into the elite 10 in Florida 2 mile history.  Change was on its way. But no-one would imagine it would happen so soon afterward.
Track & Field News Magazine for years, starting in 1956, had compiled the top cumulative 2 mile times, the top 5 runners times added together, as a way to measure whom may be the best Prep team in the nation. Only recently had any Florida Preps teams even felt they could compete at this level. Ed Palmer would lead the Largo Packers to Florida's 1st ever appearance on T&FN rankings top 10 finishing 7th with a combined 48:41.2, thus energizing the desire to be the best team at the 2 mile distance for many prep teams in Florida!
Now this finally takes us to the unheralded, often forgotten, 2 mile race in Florida Prep history. The GREAT RACE was held on October 21, 1974 at Brandon High School's track during the middle of Cross Country season. Five teams gathered for this Postal meet, the host Brandon, Chamberlain (Tampa), Largo, Northeast (St. Petersburg) & St. Petersburg. Collectively these teams were the best or had some of the best runners in the Tampa Bay area.
Under the guidance of Coach Brent Haley the Largo team was looking at returning to the T&FN top ten. This was not an assurity since this '74 lacked the star quality that Ed Palmer had brought to '73 team. Largo had by this time developed a running culture like no one else in Florida and this was a team event a star may not be needed.  Both Brandon & Chamberlain were among the best teams in the state that year led by Tommy "the Blade" Curtis & Bob "Robert" Braman the future head coach at FSU, respectfully. St. Petersburg & Northeast had good teams being led by a Sophomore sensation Brett Hoffman & Senior Mike Deveraux, respectfully. These teams came principally to have their top talent run their best with the best of the best and this race would not fail them.

The weather that evening was less than perfect with some wind, though, Brandon's track was considered to be a fast one. All of the runners were ready, mentally clear and focused to run a race that no-one would have ever imagined.
The start was the old fashioned stagger with the break out after the 1st turn into the back straight away. Tommy Curtis was to run 9:20-25 pace and Brett Hoffman was to stay with him as long as possible. Largo's Jon Winters & Mike Warre were to run 9:30-35 pace with Braman close behind. Unlike most 2 mile races pace was strategy, not placement, essentially each runner was helping one another out to achieve their best, Winters & Warre would trade leads off after each lap to break the wind.
Everyone was on pace they planned to run at the mile and again at the end of 6 laps when Curtis started a break to pull ahead of Hoffman when the next group finished 6 laps, Warre spoke to Winters "Let's Go", and began what could be called a half mile kick, Warre led with Winters hanging tight and Braman remained in their wake. Curtis's speed was too much for Hoffman in the final lap while Warre, Winters & Braman were closing the gap between them and Hoffman.
Curtis would cross the line at 9:10.8, the fastest Florida Prep 2 mile ever, Hoffman would finish next in 9:14.9, making him the 3rd best ever, Warre would finish in 9:18.2, slipping between former Largo legends Ed Palmer & Gary Funkhouser for the 6th best ever, while Winters crossed the in 9:20, making him the 8th best ever, followed by Braman running a 9:22 the 10th best ever. Yet the race was hardly over.
Largo's entire top 7 would break 10 minutes with 15 runners total breaking that mark. Largo's Bob McQuilkin, 9:43.4, Jim Simon, 9:46.1 & Mike Klein, 9:50.2 rounded off the scoring followed by teammates Scott McCracken & Bill McQuilkin both ran 9:54. Chamberlain would add 3 more of their own to break 10 minutes, Bill Sullivan, 9:43.5, Tom Hoffman, 9:47, not related to Brett, and Don Rhode, 9:57. Mike Deveraux, 9:32.0 of Northeast & Brandon's Brantley Overcash, 9:53.0 rounds out the 15.
This race was the greatest 2 mile event ever run in the history of Florida to date and not to be bettered until the 1977 4A State Meet when Brett Hoffman ran 8:53.1. Coach Brent Haley referred to this race as "the greatest postal meet ever run in the South". But it was more. Many Milestones were set on this evening:
1) The top 5 finishers ran themselves into the Top Ten 2 milers in Florida history in just one race, almost what had taken years to do, all in a combined time of 46:25.9. 2) Largo's combined time of 47:57.9 would be the best ever for a Florida team let alone the entire South and would end up 3rd in the Nation. 3) This race had the most runners break 10 minutes in one race with 15 in Florida history. 4) Largo becomes the 1st team in Florida with 7 runners under 10 minute in a single race let alone an entire season. 5) Largo has 4 runners in the top eight runners in the 2 mile has never been matched.
Maybe the GREAT RACE will now be remembered!