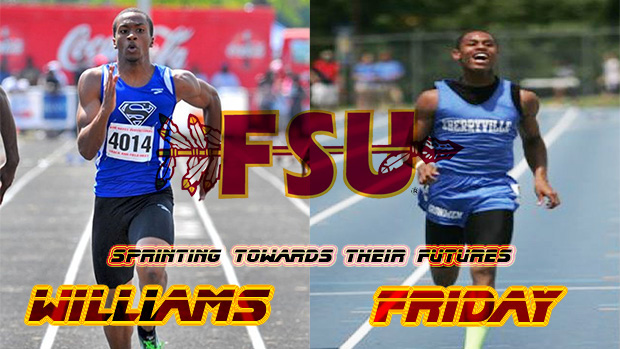 The Florida State Seminole's sprint factory just got some new thoroughbreads in their stable with committments from Kendal Williams (FL),  and Trentavis Friday (NC).

Williams a senior at Stanton Prep is a 3x state champion in the 200 meters, and won the 100 as a sophomore and finished as runner-up in that event as freshman and junior. In 2013, the standout sprinter competed in the Adidas Dream 100 where he finished sixth. Considered to be an FSU lean throughout most the of the process, he says the whole expeirence was fun and he learned a lot.

"The decision was between UNC, TCU, USC, FSU, and UF. The final decision was a hard one. I'm very comfortable in the Nole environment and I believe they can help me achieve my goals both on and off the track and at the end of the day that was where my heart was."

Now that recruiting is over Williams can focus on his senior year, graduating and making it through the season healthy. Coach James May says the Noles' are getting one heck of an athlete in his star pupil.

"If Kendal keeps making the consistent improvements he has made over the years, there is no reason he can’t add to the line of 200-meter champions (6 of last 8) at FSU. He will push the other elite runners they have and will get in practice and be a positive influence on the team. Barring unforeseen events, Kendal should help FSU win NCAA team championships.  To be cliché, the sky is the limit."

Trentavis Friday is a four time North Carolina state champion. Emerging out of the blue two springs ago, coming off an injury during basketball season, Friday picked up his first state title in the 400 meters. Last year he swept the 1A sprints taking home titles in the 100,200, and 400 meters. Following his season in the Tarheel State, the Cherryville High School standout ventured down to Florida where he finished second in the Golden South Classic and earned a golden ticket to the Adidas Dream 100 in New York City. He went onto finish 7th against the top sprinters in the country and rounded out his junior season with a second place showing in the 200 meter dash and 8th place finish in the 100 meter dash at New Balance Nationals Outdoor.