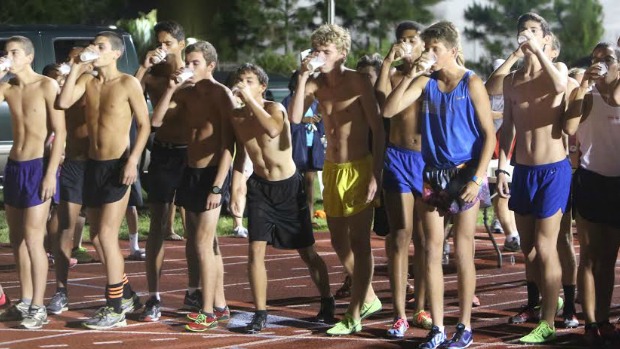 The 2014 State Finals put an end to the track and field regular season, but that didn't stop some of the state's best athletes from competing. Coach Doug Butler and crew assembled an all-star field to live up to the meet's All-Star showdown name sake. The meet concluded with the famous Milk Mile which gave athletes the chance to put their competitive juices and fun sides to the test!

On the girls' side, Lake Brantley sophomore Sinclaire Johnson who pulled the 800/1600 double at the 4A State Finals, was on fire again. Johnson beat out Aylwyn Hernandez of Ferguson by over four seconds in a time of 2:14.04, the third fastest time of her high school career.

Fresh off a 1A state title in the 1600 meters and third place finish in the 3200 meters, Evangelical Christian junior Sarah Candiano tested her skills against some of the state's best including 4A cross country champion and 3200m champion Alexa Cruz, and 4A cross country runner-up and Ole Miss signee Katherine MacNeal. A week after running a personal best 5:04.79, Candiano went even faster, dipping under 5:00 to win in a time of 4:59.35. MacNeal was second in 5:04.99 with Cruz in third in 5:09.64. Her time broke the track and meet record of 5:00.85 set by Winter Park alumni and current University of Southern California runner Kira Soderstrom in 2011.

The boys' races were equally as exciting. The 800 featured 4A cross country state champion Nick Diaz along with Plant's Jack Guyton who won both the 1600 and 3200 meters at the 4A State Finals. However, the winner of the race wasn't either of those two guys. Another Jack, Jack Rogers of Robinson came away with the "W" in a race that came down to the final meters. Five guys dipped under two minutes with Rogers coming in at a new personal best 1:55.50.

If you want a standout performer, the votes go to Windermere Prep junior Franco Martins. A week after sweeping the 1A 1600 and 3200 meter titles, Martins used this meet as a tune up for the Golden South Classic in two weeks. He says the game plan coming in was to click off high 68's for the first 400 and hit 4:35 for the first mile.

"I think I pretty much did that with the help of Kyle Butler.Then the initial plan was to try and negative split the second mile to go sub 9:10, but when I arrived to the meet and felt how bad the wind was I called my coach and we decided to just let the second mile play out and just run it as fast as I could. I wasn't sure of what the meet record was until about five minutes before the race, but as the laps were going by especially in the last 100 meters, I knew in the back of my head I could break it. I thought about how special it would be to hold the meet record especially on a track like Holy Trinity where so many great runners have come from. Overall I was really happy with my performance."

Two 5000 meter races, approximately 45 minutes, was all that stood between Martins and his next event, the famous milk mile. The Windermere Prep junior had never heard of the event before he arrive on the Holy Trinity campus that afternoon. He says he was tired after running the 3200 meters, but figured why not give it a try.

"I have a pretty solid stomach so I was confident I could keep the milk down so that was a plus.The first three laps I guess I was just feeling it out and having fun but when we hit that fourth lap I felt better than I expected and just ran as fast as I could to break five. This was a fantastic meet, great atmosphere, I definatly liked how they played music during the races, and I'll be back next year."

Miami Sunset's Ronny Greenup and Trinity Prep's Chas Cook both broke sixteen minutes in the 5000 meter run going 15:51.86 and 15:54.37 respectively. Special shoutout to Kyle Butler, who not only purchased the gallons of milk for the milk mile, but paced three races over the course of the night, and concluded with a fourth place showing in the milk mile with a time of 5:10!