About the Meet:
The 32nd Annual Spanish River Invitational kicked off on Saturday morning with a few changes to the usual routine, but the tradition of one of the biggest and longest standing South Florida competitions continued successfully. For the past 31 years Coach Rick Rothman, one of the most influential and successful coaches in Florida, hosted his home school's self-named invitational. After retiring from the high school ranks this past year and moving on to the college realm, Coach Rothman passed on his meet and it's great legacy to new Meet Director: Coach Ken Key of Westminster Academy. There we a few minor changes to this year's invitational, the removal of the freshman boys division, and a small time schedule shift, but just as we have seen for multiple decades, there were plenty of strong performances for many top state teams, fast finishes for many of the state's top individuals, and fantastic awards recognizing the top athletes and teams in all four classifications. Here's a quick recap of all six races from yesterday...

3A/4A Girls Varsity Race Recap & Awards Winners:
With the removal of the freshman boys race, the 3A/4A Girls race kicked off the meet. Through the first bend of the course at the half mile mark there was a good 10-pack of girls all jocking for lead positions, but by the halfway mark of the course it was clear that the two seniors from Ferguson, Aylwyn Hernandez and Lauren Gavulic, were the favorites as they had a good 40-50 meter lead on the chase pack. They finished as listed above, only two seconds apart from each other, and a good fourteen seconds ahead of the next best finisher. In the team race this was supposed to be a battle of the Bobcats! Lourdes Academy and North Port both representing the same mascot were the contenders as they are currently ranked 3rd and 4th in the FACA 4A Girls Rankings respectively. However, because Lourdes didn't run a complete varsity team for this competition, and North Port having a weaker back half of their varsity allowed for John A. Ferguson HS to come home with the small margined victory. 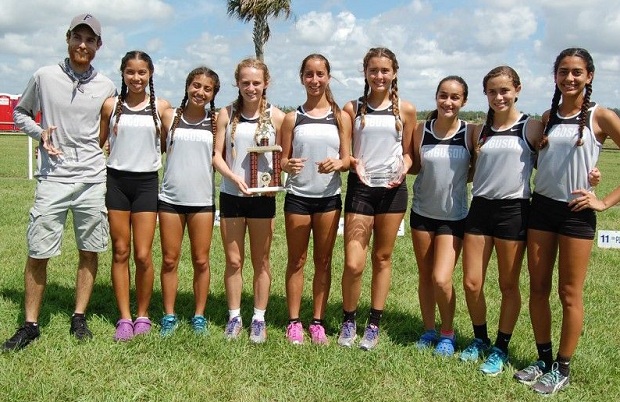 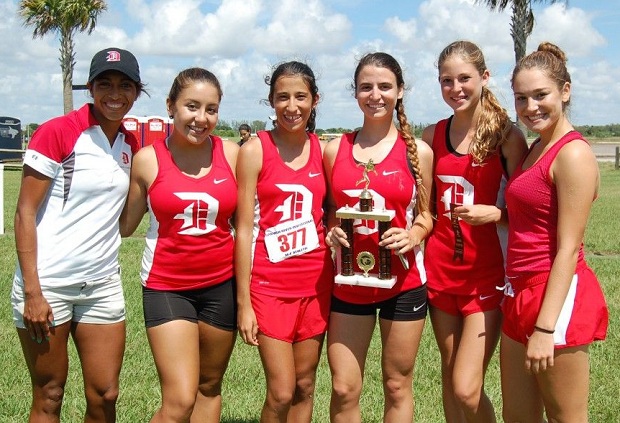 3A/4A Boys Varsity Race Recap & Awards Winners:
For the large school boys race Nick Diaz, the defending 4A Boys Individual Champion, looked to be the easy favorite. However, he surely got a run for his money when rising senior Tomas Gimenez-Beron of Pembroke Pines Charter through in a series of surges in the last quarter mile, challenging for the win all the way to the line (as seen below). Diaz pulled out the victory by less than a half-second and showed once again his determination when it comes down to a final kick. In the team race, Pembroke Pines Charter looked to be the big favorite coming in especially with standout runners Gimenez-Beron and the Penaranda brothers; between them you were possibly looking at three top five finishers. Other possible team contenders as seen in the virtual meet included Miami Sunset (who ran without their #2 runner), Douglas, John I. Leonard, and John A. Ferguson. Although PPC was able to secure 2nd and 3rd place individual finishes, their back half of varsity just wasn't strong enough to hang with the very strong pack from John A. Ferguson whose 1-7 spread of 35 seconds helped edge out the victory by a single point even though they only had one individual finisher in the top ten. 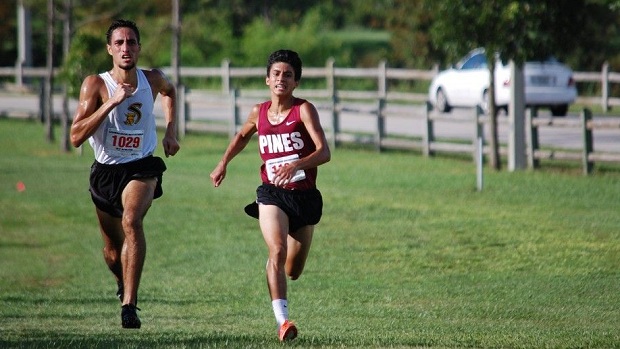 The final kick to the finish between Nick Diaz of Miami Sunset and Tomas Gimenez-Beron of Pembroke Pines Charter. 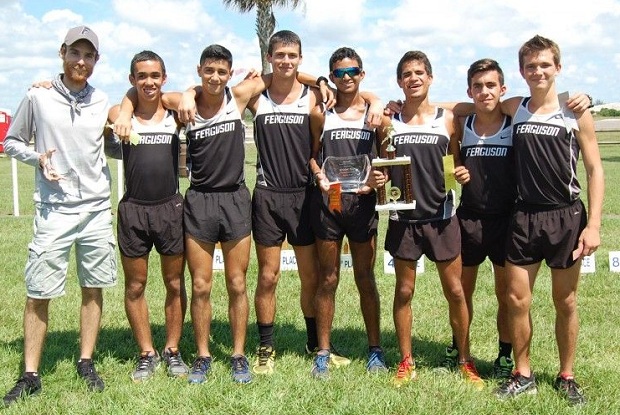 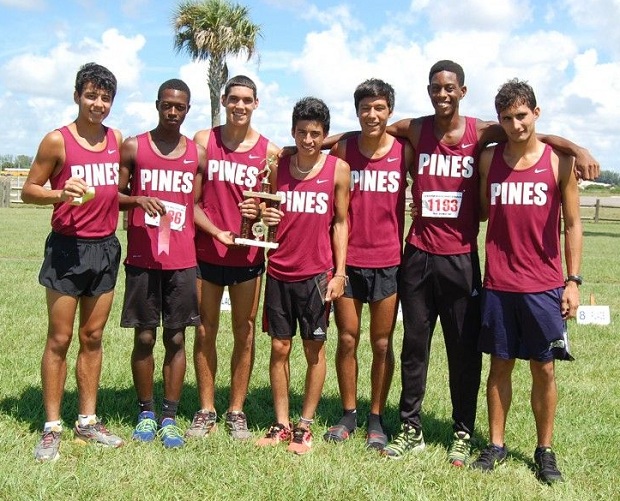 1A/2A Girls Varsity Race Recap & Awards Winners:
Starting off with the usual mody South Florida weather of in-an-out of clouds, then heat and humidity for their race, all of these girls also happened to get the lone small rain cloud of the day which hit the course just as the top finishers were coming in. Your big individual favorite was Alyssa Pujals of Gulliver Prep, who is having a stellar season so far this year and she did not disappoint as she brought home the win by over 40 seconds. The team race looked to be a bit tighter between a couple of 2A rival schools from Miami, Carrollton and St. Brendan. Both schools were fairly evenly matched and staggered amongst each other throughout both teams, but strangely enough the school with the better spread, and whose sixth runner was able to push back the other team's fifth, was unable to get the victory. Carrollton was able to pull out the ten point victory by having a stronger 1-2-3 comparatively over St. Brendan even though they had the weaker back half on the day, very much so opposite of the early races on the day. 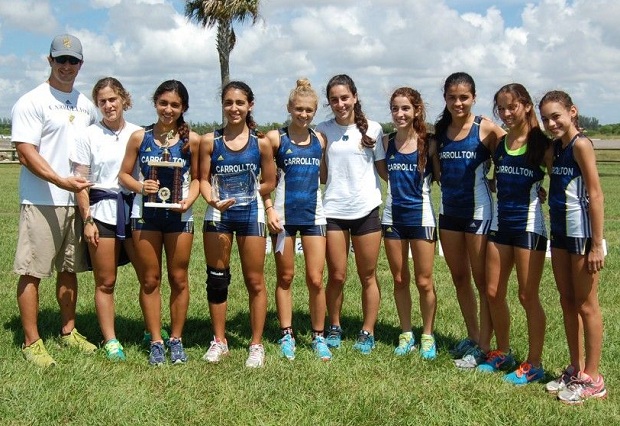 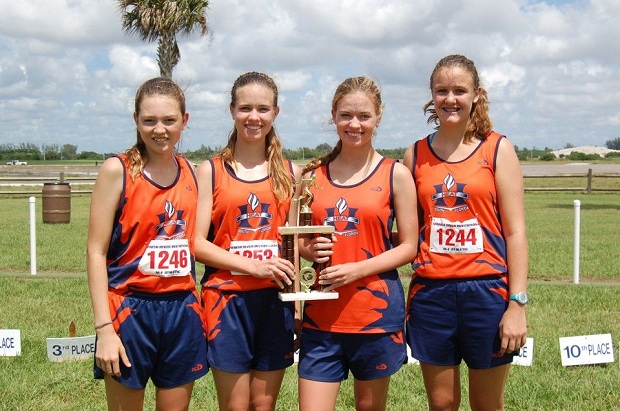 The Class 1A Team Champions from South Florida HEAT.

1A/2A Boys Varsity Race Recap & Awards Winners:
For the smaller class boys race, the finish for individual honors was very similar to the smaller girls division. Joel Lacy from Calvary Christian pulled off a big win by over 25 seconds from his nearest competitor as he just barely dipped under the 17 minute mark. In the team race, Lacy was quickly followed by three of his teammates who placed fourth, sixth, and tenth, while they held their breaths waiting for the fifth man to come in. Meanwhile, Gulliver Prep was able to run a quick spread of only 70 seconds, less than half of the Calvary spread, and get all five runners in before anyone else. Unfortunately, just as in the 1A/2A Girls race, Gulliver didn't have enough front fire power to contend for the win, as they only had one top ten finisher versus Calvary's four in the top ten. Calvary Christian picked up the team victory by a solid 37 points. 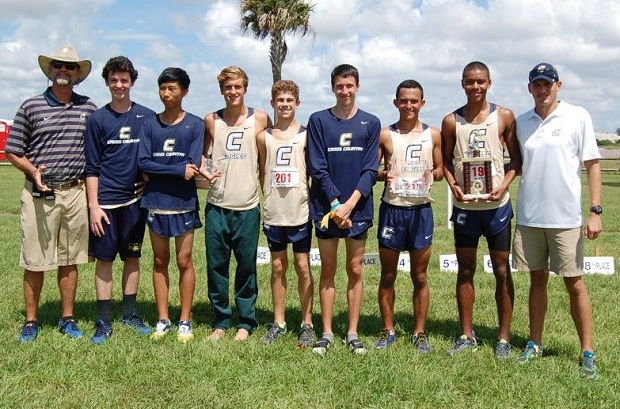 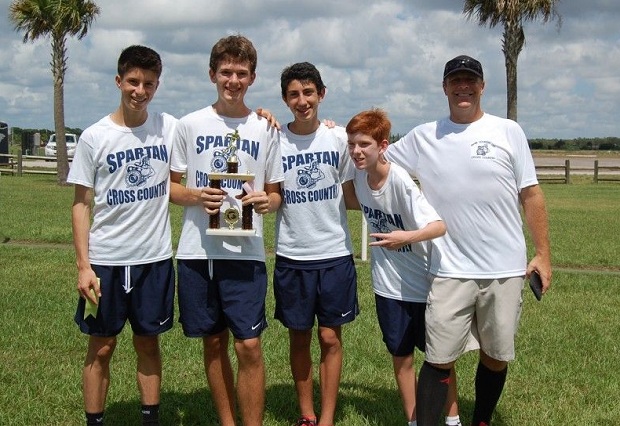 Overall Girls Junior Varsity Race Recap & Awards Winners:
The girls junior varsity race started off with quickly as the top girls from Dwyer and Homestead quickly made their ways to the front. While able to hold off many contenders for the first half of the race, a couple of strong girls from Ferguson crept up and then eventually pulled away big time in the last mile. Taylor Tejera of Ferguson got the individual win by only three seconds over her teammate Jessica Elizondo as they gapped the third place finisher by 35 seconds. As for the team race, from beginning to end looked to be an easy win as the Ferguson team had the most girls in the top tier, as well as the most depth in the field. Ferguson placed ten girls in the top fourteen finishers, and placed 1-2-4-5-6 for team points to get the big team win, which was 70 points better than the next closest team. 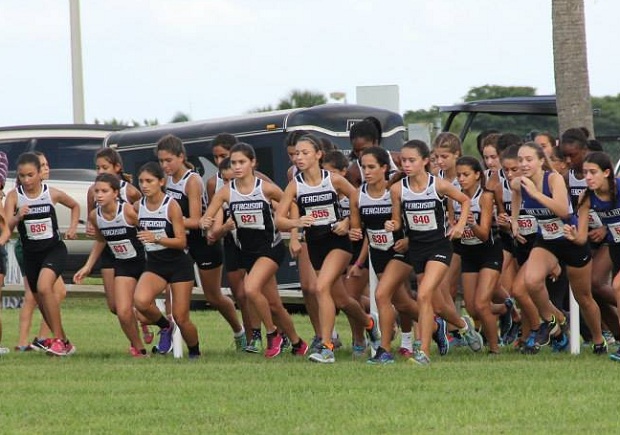 The Girls Junior Varsity Team Champions from John A. Ferguson HS starting off the race.

Overall Boys Junior Varsity Race Recap & Awards Winners:
The final race of the day was the boys junior varsity race, and it was definitely one of the hottest races as this race was being run near the end of the morning. For the individual race there was a nice pack through the first half of the competition between two boys from Pembroke Pines Charter, a boy from Deerfield Beach, and a few boys from John A. Ferguson. But once the second half of the course rolled around, the top three boys made a big surge to gap the rest of the field, as Christian Gomez of Pembroke Pines Charter sprinted to a five second victory over second place. In the team race, there was what appeared to a be similar finish in the boys varsity as PPC and Ferguson duked it out with both schools placing many strong finishers in top of the race. While Pembroke Pines Charter was able to place four in the top ten, a very weak five caused them to drop to third for the team tace. The JV boys from Ferguson, who placed five in the top nine to get the team win, and gave their school a clean sweep for all of the team championships they raced in on the day. 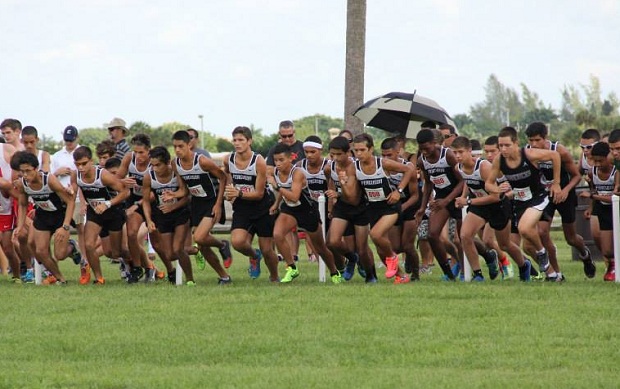 The Boys Junior Varsity Team Champions from John A. Ferguson HS starting off the race.