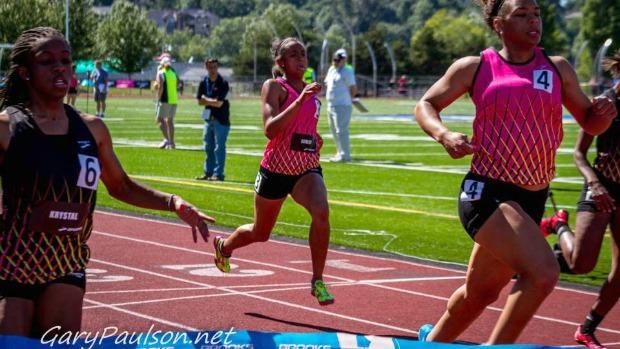 Texas A&M signee Krystal Sparling (far left) makes her second consecutive trip to Seattle and the 2015 Brooks PR Invitational after finishing second in the 100m last year behind Kaylin Whitney. Sparling, the 4A state champion in the 100 and runner-up in the 200 meter dash owns personal bests of 11.34 and 23.34 and is one of two Floridians in the race.

When did you first learn that you were invited to the Brooks PR Invite and how did your react?

At first I thought I was in trouble, but then I realized it was the invite. So, it was a good surprise.

What does it mean to you to be invited to the Brooks PR Invitational?

I was expecting to be invited back to the meet. It's just a wonderful experience.

What do you hope to achieve at the meet?

To come away with a victory and PR.

What music do you listen to before races?

I listen to Fetty Wap.

I would want to have my Bible, food, and spikes.

What would you consider as your best or most favorite race of all-time and why?

My all-time favorite race would be last year when I PR'd at regionals.