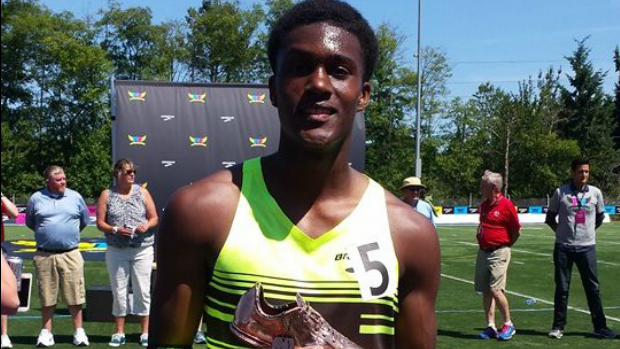 Northeast rising junior Damion Thomas is all smiles after winning the 2015 Brooks PR Invitational 110m hurdles in 13.62w. The time is a new all conditions personal best and had the mark not been wind aided it would have marked a new sophomore class national record. The win caps off a spectacular season in which Thomas captured the 4A state title. Antwuan Musgrove, the 2A state champion in both the 110 and 300 meter hurdles was 4th in 13.86. Musgrove is headed to Baylor this fall.

West Broward senior and University of Miami signee Isaiah Taylor tied his wind legal personal best with a 10.52 in the boys 100 meter dash. Taylor came within a nose of defeating Lawrence Crawford of Rockdale Co. Georgia who won in 10.51.

Speaking of those Georgia kids from Rockdale County, fans in Seattle were able to witness the FASTEST time ever by a high schooler as sophomore Candace Hill went SUB 11 SECONDS, wind legal 10.98. Pasco's Alfreda Steele clocked a new personal best and state leading time of 11.33 to place third, while Texas A&M signee Krystal Sparling who was runner-up in 2014,was fifth with a season best of 11.37.

Ashley Miller who was running in the Brooks PR Invitational as a Floridian for the first time, finished in the exact same place as last year, third with a time of 13.5s. The mark was just shy of her season best of 13.48 and an improvement over the 13.56 she ran a year ago. Miller who swept both the 100 and 300m hurdle state championships in 4A will head to the University of Texas in the fall.


3A 400m state champion Janaya Chambers was fifth in her Brooks PR debut with a time of 55.75.