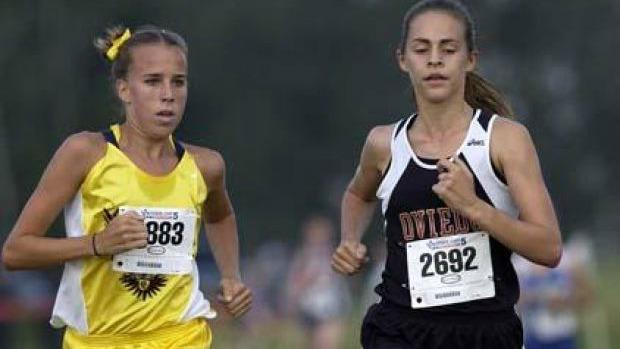 Nicole Tully (Schappert) and Jenny Simpson (Barringer) were rivals in high school. Simpson beat Schappert in the 2003 and 2004 flrunners.com Invitational Race of Champions. On Sunday, the final day of the USA Championships in Eugene, Oregon both claimed their spots on Team USA by winning the 5000m and 1500m runs respectively.

Tully, who was representing the NJNYC Track Club was competing in her second 5k ever as a professional. The prior being her 15:05 performance at Payton Jordan. Tully narrowly edged out Marielle Hall by one one-hundredth of a second 15:06.44 to 15:06.45, relying on a strong kick. Afterwards, Tully was greeted by sister Stephanie Schappert, a standout herself in her high school days now running at Villanova. She said it was cool to be a part of this race and was so pleased she had it in the last lap and was able come home strong and hold on in the last 30 meters.

POST-RACE TWITTER: "Sometimes life lives up to your wildest dreams and you even surprise yourself... Just a regular girl with nothing to lose." #usatfoutdoors

Jenny Simpson called Tully's race am-a-zing and had this to say to her. "Congrats Nicole! Can't wait to see you this summer!" Simpson was equally impressive in her race, which played out to be a tactical 1500m. The defending 1500m champion at the 2014 USATF Outdoor Track and Field Championships, she was also the 2014 Diamond League winner in the same event. and received an auto qualifier to the World Championships. Simpson, a New Balance athlete edged out Nike's Shannon Rowbury 4:14.86 to 4:14.99 and planned to take this meet as a prep course for the 2016 Olympic Trials and Rio.

If there is anyone to beat this season in the sprints, it's Justin Gatlin. Gatlin wants nothing more than a showdown with a healthy Usain Bolt in Beijing and if the two were to meet tomorrow I'd put my money on Gatlin. The Nike star ran 19.90 in the semifinals and follow that up with a a new Hayward Field record, meet record and fifth fastest 200m time ever of 19.57.

Kaylin Whitney sets World Youth Best 22.47 200m and finishes fourth overall to just miss out on Team USA. Whitney will represent the red, white, and blue in Canada at the Pan American Games.