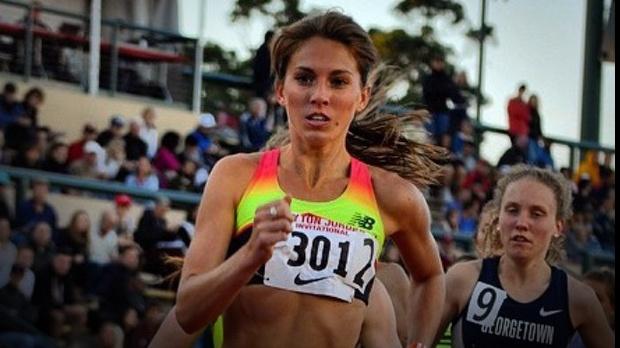 This year we are honored to have former Florida Gator and New Balance professional Cory McGee as our celebrity guest for the Flrunners.com Invitational 16.

McGee began her high school career in Mississippi where she was a TWENTY-TWO time state champion at Pass Christian High School. Following graduation she attended the University of Florida where she was an NCAA runner-up and five-time all American in the mile!

She will be on-site both Friday and Saturday taking photos with athletes, signing autographs, handing out awards, starting our Race of Champions, and even helping to judge our famous dance contest! So stop by and say hi!

We caught up with Cory on Wednesday for a Q&A session. Here is what she had to say!

How did you get involved with running? I read that you were in Greece and that the 2004 Olympics really fueled your fire?

My initial interest in running began on the beach in Pass Christian, MS with my family. I was always finding ways to spend time with my older sister who doubles as my best friend. She would go run along the coast and I begged to tag along. A few years later, my family moved overseas. The time we spent in Greece in 2004 exposed to the possibility of becoming an Olympian. I was inspired and felt my goal was realistic and achievable. Since then, I have been focused on the process.

You even ran your first race in Egypt? Do you remember that? Must have been a little different than in the US?

I remember my first race vividly. The event was in Cairo and I faced runners from all over the region. We had two races within one week. The first was set in the dessert and the other in the Nile delta. Abu Dhabi, Bahrain, Kuwait, Egypt, Libya, and a few other nations had teams ages 12-17. I was young. I can remember the girl from Bahrain who was a hopeful winner. We ran side by side for the majority of the race. I remember pulling away and going around cones as I sunk into the sand. It was blazing hot. Winning the races that week gave me confidence. I did not understand the impact at the time, but I believe my first year of cross country motivated me when I moved back to Mississippi and did not have an established team.

You went to a small high school in MS, what were your high school days like? You won your first state title when you were in 8th grade.

High school days in Mississippi were full of adversity but matched with an equal amount of positivity, love, and support for my pursuit as a runner. My first state title in cross country came in 8th grade, only months after hurricane Katrina disrupted my town. My middle school was washed into the Gulf along with the majority of the town I grew up in. I was purely motivated at that time in my life to bring joy and positivity to my home town. Through the disaster of the storm, my friends and family helped me train from the months of August to November in preparation for the state meet. Overall, looking back on my high school days, I am so thankful to have understood early on the potential running can have on a community.

Was that the point you were like hey, this might be something that can take me places in life?

I do not recall ever having a moment where I started to see running as something that would take me to where I am today. I have seen myself as a runner for many years now. I can hardly remember life before I called myself a runner. It has always been something I felt would take me far because I never have imagined life without it. People hesitate to put all their eggs in one basket. I have never felt timid about being completely invested in running. It's always been a part of me so it's difficult to see myself going anywhere without it. Overall, no single moment did I stop and think about the potential running would have on my life. I've always just taken it day by day and focused on my preservation of loving what I do.

You decide to attend UF. What was it that sold you on the Gators?

Many components of my visit to Florida assured me that was the school I could most fully achieve my academic and athletic endeavours. I grew up a Florida Gator football fan but never imagined I would attend the university. Years later, I remember the day the UF coach called and for the first time I started imagining being a Gator athlete. After experiencing the energy in the stadium and feeling the passion embedded in the athletic community at Florida, I began to believe in something bigger than myself. Through that emotion, I knew I was meant to be a Florida Gator.

What will you remember most about your time at UF?

I reflect on my four years at Florida and the most impressive and special moments were not at the meets. The most impactful times were created during practice. Being on the track with a dozen Olympians, sharing the lanes with world champions, and training among some the finest athletes in the world, day after day, made me believe I had everything necessary to be great. After believing, I had to learn to trust. When my coach promised something, the only piece missing was a personal dedication to the vision. When I bought in, I accomplished my goals. The thing I remember most about UF is the trust in my relationship with my coach and my team.

After graduating you went pro and signed with New Balance. How was the transition from collegiate to pro athlete?

The transition from collegiate running to professional running was tough at times but equally rewarding. I underestimated the change. I moved from Florida to Boston just after signing with New Balance. Shortly after, I faced my first running related injury in six years. The three months of injury were out of my control. After ten years of imagining myself going pro, I was hurt and the timing frustrated me. After recovering from that obstacle, I finally got my feet back under me and began training in December. Although training was disrupted and I was unhappy, my injury assured me I had made the best choice when signing with New Balance. I felt overwhelming support and love from my team and coach from the beginning. The transition was initially difficult but injury always reassures me how much I love what I do. Overall, I learned a lot from the experience.

This summer you spent a lot of time in Europe. Do you have a favorite race or moment?

This summer was my third year traveling for races in Europe. My favorite moment from the trip was not during a race. I most enjoyed being with my team in Leuven, Belgium where we lived for a couple weeks and trained in preparation for our races. While we were abroad we spent a lot of time together meeting other runners.

This weekend you will get the opportunity to spend a lot of time with younger athletes. What advice do you have for them?

My advice for any younger athlete is to never hesitate to love what they do. It's good to be fully about what you love. When you find what you have a passion for, do not let anyone make you feel timid about your desire for the pursuit of greatness. Often times, intensity can be intimidating. If you feel you can be great, be committed and surround yourself with people who love your passion.

When was the last time you were at a 5K XC race and what are you looking forward to most about being the celebrity guest at our meet?

The last time I attended a 5k was my senior year of college. I'm most looking forward to meeting young runners who help me to remember to appreciate the nature of the sport. After years of running, on occasion I forget to fully appreciate how special our sport is. Every time I attend a high school race my love for running is renewed. I am so excited to see people who truly love what they do.

We wanted to get the inside scoop on Cory not just on the track, but off as well!

What are three things people might not know about you?

1) I have never done a cartwheel in my life. I've attempted many but have never been successful.

2) While running fast is something I am proud of, I'm sometimes more proud of how quickly I can peel crawfish.

3) Since I was young, I have gone to church across the street from my home in Mississippi. Even now, when I go back, my sisters and I still race home. It's a Sunday tradition.

Do you have a favorite home cooked meal?

Hands down, country fried steak with white gravy made by my grandmother. This meal has been my favorite for as long as I can remember. Add some jalapeño corn bread and sweet tea and we have a feast.

What is the best thing about being a professional athlete?

The best thing about being a professional athlete is the feeling of putting on a racing kit and knowing you've done the work, you belong right where you are, and you believe in what you are racing for. For me, I have always felt so much love and support from my family, my hometown, my college, and now the company I represent. All of these components come together to make being a professional athlete overwhelmingly fulfilling for me.

What was the most valuable advice anyone has ever given to you and who was it from?

The most valuable advice I have ever been given was that nothing is a chore. My grandmother talked to me once about doing things I do not enjoy with love. If I hated to sweep the porch, I should remember I was cleaning for my family, who I love. If I was cooking, I should do it with love. Since then, when I have needed to do a difficult task, there has always been a way to see positivity in it.

New Balance is based in Boston. Have you converted into a New England fan and what are your thoughts on the new HQ that has a track on the roof!

While I adore Boston, I am still a true southern girl at heart. The headquarters is magical. The building is absolutely incredible and I can see it from my apartment. I've been traveling constantly since it opened so I have not spent much time there yet but I'm excited to see more of the development.

Lastly, the mascot of our meet is an alligator. Being a former UF Gator (just a coincidence) how cool is that and what should we name it?

I am so exited the mascot is a gator. I once pet a 13 foot gator in the Louisiana swamp. His name was Big Al so maybe we could name the mascot after the gator that could have killed me.