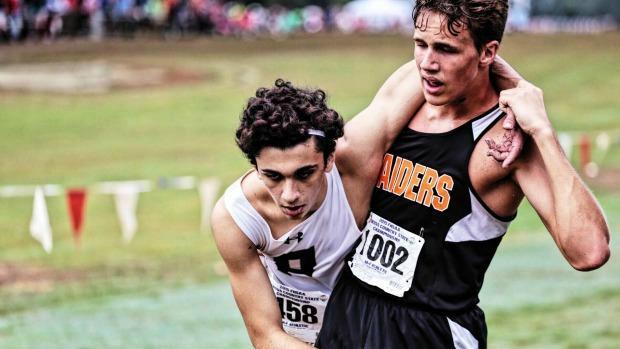 In the midst of the days events, state championship winning performances, and a course record there are moments that can easily be lost. One such moment occurred during the 4A boys race. I was busy doing interviews, our videographer focusing on the finish line, but luckily photographer Cedric Gillette captured something we rarely see in sport.

SECONDS before the end of the race, as the runners descended on the finish, Walker Thomas of Plant went down. Rather than racing past him like many others would have done and or did, Plant City junior Luke Whitmore stopped took Thomas' left arm hoisted it around his neck and carried the fallen runner through the finish. Plant High School Coach Bryan Garcia says it was crazy to be there.

"I was right there when he went down and obviously I was concerned. He kept trying to get up but could not. Luke came out of nowhere, stopped running and picked him up and carried him to the finish. Walker was upset, he was out of it at the end.  I was concerned for him and thankful for Luke's kindness. It was a wow kind of moment."

Whitmore knows the experience of collapsing during races, as he struggled early on in the season and at regionals last cross country season. Plant City coach Drew Martucci says at first he thought it was his runner that was going down.

At first from afar I thought it was Luke . He's gone down at our opening meet of the season. I did see him then carrying the plant kid to the finish and realized he was way back finishing after seeing him in about 45th place with a half mile to go. I was concerned for him and just wanted to make sure he was alright, but as soon as I saw that I turned from a worried coach to a proud coach within a split second.

FHSAA rules frown upon assisting/aiding athletes in competition. It's a sensitive issue. When should an athlete help another athlete? When does a coach step in or do you leave it for medical personnel?  The thought of possible disqualification definitely crossed Martucci's mind for his school's lone state qualifier and his competitor from a powerhouse program.

"I was worried. No matter if he got DQd (which neither did) or not he was a champion in my mind for having a big heart when it counted most at the biggest meet of the season. That's the last thing you expect to see at a state meet when you've trained for months for that one big race to finish the season strong."

After the race, Whitmore walked up to his coach and told him that no other thought crossed his mind, but helping his fellow runner out.

"He told me coach I had to pick him up I know what it's like to go down and I didn't want him to go through what I did. My only words were I'm proud of you. You did something bigger than the race."