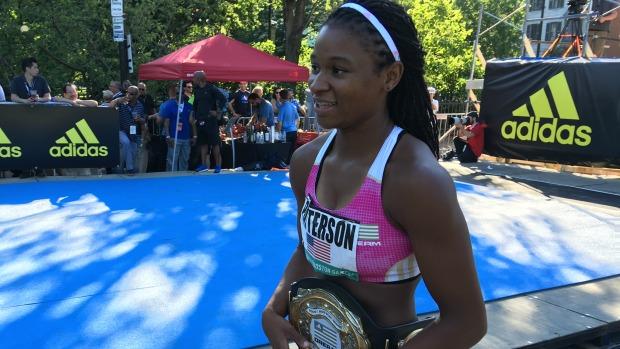 Haines City High School rising senior Amuru Patterson becomes the fourth Florida sprinter to win the girls Dream 100 joining Octavious Freeman (2011), Shayla Sanders (2012), and Kaylin Whitney in 2014. Her time of 11.59 is just shy of her personal best 11.53 and ranks as the 5th best time from the Sunshine State in this meet behind Kali Davis-White, Sanders, Teahna Daniels, and Kaylin Whitney. Patterson had the rare task of pulling off the win on a track that was literally put in the Boston Common over night, something that has never happened on U.S. Soil. After the race, she was so excited  she was at a loss for words when being interviewed by Olympian Maurice Greene. We caught up with her a little later to talk about the race, her fantastic 2016 season, and what's next.

Florida showed why it was the fastest state in the country tallying the 1st, 2nd and 3rd spots with Patterson, 2A 100/200 champion Katia Seymour, and 7th grade phenom Tamari Davis rounding out the top three. Seymour who came in with a US#1 11.26 from the Great Southwest Classic in New Mexico was behind Patterson in 11.66. She will head straight from Boston to Greensboro, NC where she will run the 200m dash at NBON.
Davis only 12 YEARS OLD, made history when she stepped on the track as the youngest ever competitor in the Dream races on either the sprints or distance side. The sprinter showed she belonged in the race getting out of the blocks with one of the fastest starts in the field and hanging on for third place and tying a PR of 11.77. It was a special day for Davis who had her parents in the stands as well as Coach Gary Evans who coaches for Pure Athletics, and the top Adidas athletes in the pro races.
Not to be outdone by the ladies, Anthony Schwartz of American Heritage came into the race with a personal best of 10.27w from regionals. However, a couple of setbacks including a recent injury and some travel delays didn't have him on his "A" game, Schwartz still managed to pull out a runner-up finish behind Eric Stokes of Georgia in 10.66s.
In the pro races, Clermont based Pure Athletics, an Adidas training group, had what coach Lance Brauman called a very great day.  Marvin Bracy, who won the Adidas Dream 100 FIVE years ago as a high school athlete from Orlando, defeated Jamaican Olympian Yohan Blake in the 100m dash by THOUSANDTHS of a second, a race to close to call by the announcers at first.