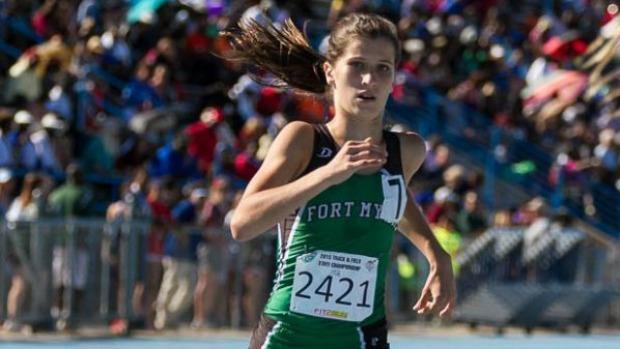 Fort Myers senior Krissy Gear didn't rush the recruiting process opting to sign this Wednesday instead of the November early signing period. Gear, a three-time state champion, winning the 1,600 m in 2015, and the 1,600m and 3,200 in 2016, decided to continue her running career at Furman University. We talked to her about the recruiting process, what sold her on becoming a Paladin, and her plans for 2017.

​I wouldn't imagine it differed much from any other athletes. It's exciting and slightly terrifying at once, and that combination can make it overwhelming at times. Being blessed with the opportunity to be able to continue running at the collegiate level is absolutely thrilling. However, being faced with so many options of so many great schools and having to weigh the pros and cons of each can be stressful. I enjoyed all three of my visits. I'd say the worst part, for me, was having to let the other coaches know that I had decided to sign with Furman. I'll admit, I'm a people pleaser to a certain extent and I just want to make everyone happy, so I felt bad breaking it off with the other coaches, even though I knew they understood.

Where all did you visit/ consider?

​My three official visits were Florida State, University of Maryland, and Furman University.

I know some of your peers decided in November. Why the decision to wait?

​Honestly I wasn't ready. At all. I was still trying to figure out what schools I was really interested in and where else I was going to visit. I took my first visit in early November to FSU but I wasn't totally sure where else were my top choices. I kept switching my mind. Honestly, I had no interest in Furman initially because I wanted to go to a big school. In December they reached out to my Coach, who convinced me to give them a chance and I'm so incredibly happy he did and I didn't miss out on this amazing opportunity.

What sold you on Furman?

​Where do I begin? Something that really stood out to me and was a big factor in my decision was Coach Rita Gary's trip down to Fort Myers in early January towards the end of my winter break. It meant a lot that she would take the time and effort to come visit me personally to talk about Furman. By the end of the home visit I knew that Furman was where I wanted to go. The official visit was just icing on the cake. Since we don't have an indoor season in Florida, I was worried about having to perform year round in college: cross country, indoor track, outdoor track. Especially when I already struggle with two seasons hahaha. However, Coach Rita informed me that they focus more on cross country and outdoor; indoor isn't as big of a deal to them. That was nice. I knew that the coaches at Furman would have high expectations of me and hold me to them, but not in a way that I would feel pressured negatively. As much as I love the idea of a big school, I know that a small school would fit my learning style better and give me a better relationship with my professors. Furman is also one of the top undergraduate research universities in the U.S. and offer so many opportunities to help you succeed, such as internships and studying abroad. When I took my visit, I fell even more in love with the school and grew more confident in my decision to sign. The girls on the team that I had the opportunity to meet were beautiful on the inside and out. The coaches were very personable and people I knew I would enjoy and get along with. The team itself is relatively small and the majority of the track team is distance, so that intimacy will be nice. Having the same group of girls to train with year round and not having 30+ other teammates (like you might find at a big school) makes it easy to not feel excluded. I feel like I've typed so much already for such a simple question but I can't say enough good things about not only the campus and the program and opportunities offered, but the people too. I'm so pumped to be a part of it all next year.

How important was it to get the decision behind with track season looming?

​Honestly, I didn't make it a high priority and was just planning to let things unfold and see where my times and everything took me, but I'm really glad I committed when I did. Once I informed Coach Rita I wanted to run for them for the next four years, I suddenly felt like this weight was lifted off of me. It's nice to have the search for colleges out of the way. I don't feel too pressured to do anything special and now I can just focus on improving for my final season. Woo hoo!

​I'm kind of hesitant to state my goals, just because if I don't reach them it'll be awkward and probably make me look cocky. I don't want that and I don't mean to sounds cocky. But I guess if I publicly state them it'll give me more incentive to reach them so I don't make a fool of myself haha. Timewise, I would love to run low 4:50's for the 1600, 10:30's for the 3200, and maybe pop a 2:12 in the 800? I'd love to run fast in the 800 but that's not my focus or what I'll be training for. As for pole vault, I'm not sure that I'll be vaulting this year. It would be a dream come true if I could repeat as the 1600/3200 state champion this year. I'd like to keep the 800. If I compete in four events, the fourth one is undecided right now. Maybe I'll vault, maybe I'll be part of a relay team? Or maybe I won't run a fourth event. I'm not sure. We'll see as the season progresses. (Oh p.s. Good luck to everyone reading this! You guys are gonna do great!)

How has your training been going and what is your outlook on 2017?

​Up and down. But that's normal, isn't it? I've had some workouts that I'm really happy with and some that I just had to get over and look forward to the next workout to do better. What am I looking forward to most about 2017? Well, early 2017 I'm excited for track to start and see how well everyone runs this year and hopefully I'll run well too. Later 2017, I'm so stoked to begin running in in Greenville with my Paladin pals!!!

Looking ahead to college, what are you looking forward to most about being a Paladin and joining that successful program?

​Okay, for some of you reading this who might've been thinking this whole time "Furman who??? What's a Paladin???", let me just tell you, IMHO, I think they're a highly underrated program. They're probably one of, if not the smallest D1 school, yet both the girls' and guys' programs produce incredible runners every year. The girls' team actually just missed out on making it to the national meet last year in cross country by four points. I know their goal is to make it next year, so I'm thrilled to be training with such an awesome group of ladies. If I do well and can make that varsity team that makes it to NCAA's, it would be absolutely incredible. If not, I'm perfectly content and honored to be part of the Paladin family and train with the girls who'll be in that top group. Go Paladins!!!