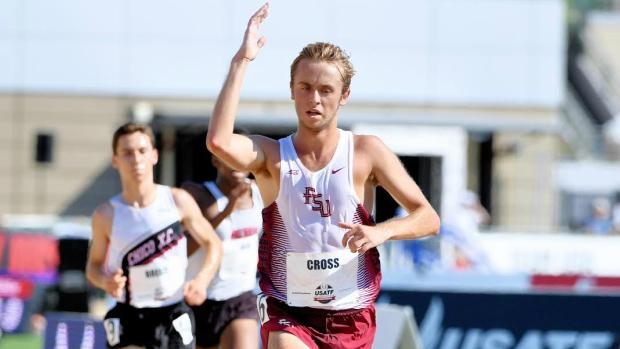 It seems like just yesterday that FSU freshman Steven Cross was schooling the competition in the Merritt Island black and gold. As a senior, Cross was a Foot Locker National finalist and won the the Cross Country Finals in addition to 1,600 and 3,200m titles outdoor before heading to his new home in Tallahassee.

Saturday, he kicked off the final day of USA Juniors with a national title. Cross was in the front for a majority of the race and used a fierce kick to come through the line in 31:20.95, over a second and a half faster than runner-up Aidan Reed of Southern Utah. With the win he adds his name to a list of Floridians to win the 10k title including Ryan Pickering of John I. Leonard (2012), Teddy Mitchell of Lyman (1991), Michael Levalle of Boyd Anderson (1988), Keith Brantley of Winter Haven (1981), and Herb Wills of Leon (1979).

An elated Cross discussed his game plan after the race.

"That [kick at the end] was my plan all along," he said. "I just wanted to keep it relaxed going through and the guys decided to pick it up about 2 miles to go and that was good. I mean, it separated the field and so it was just three of us up front so, I just planned on using my strong kick and was hoping that would help out in the end and it paid off today." 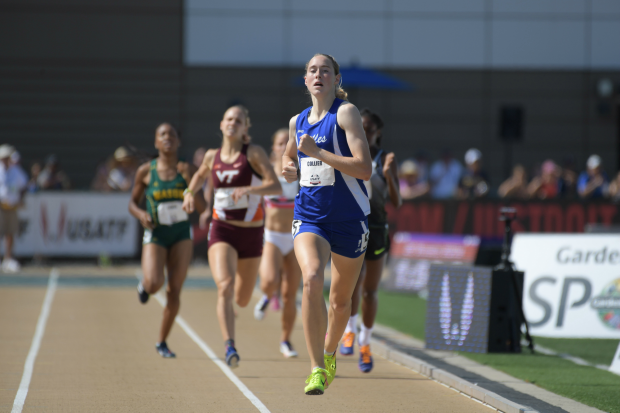 Caitlin Collier is the best 800m runner to come through the state of Florida. Mark my words. Less than a month after winning the Nike Festival of Miles against a professional field in a state record 2:03.32, The Bolles rising senior dropped a 2:03.63 to win USA Juniors and earn a spot on Team USA in Peru. Whether it's high school athletes her age, college freshmen and sophomores, or professionals, Collier hasn't been beat in the two lap event all year.

"She put together a really good race," said coach Dan Dearing. "It was very hot out and for her to run that well under those conditions made us all very proud of her.  It's a great experience to make a national team and she is excited to go to Peru and represent her country.

Dearing adds that this is a great reward for all her hard work over the last six months.

"During the high school season it can be hard for her to run great times since she has to do so much to help our team," he said. This was a great chance for her to see where she really is training wise.' 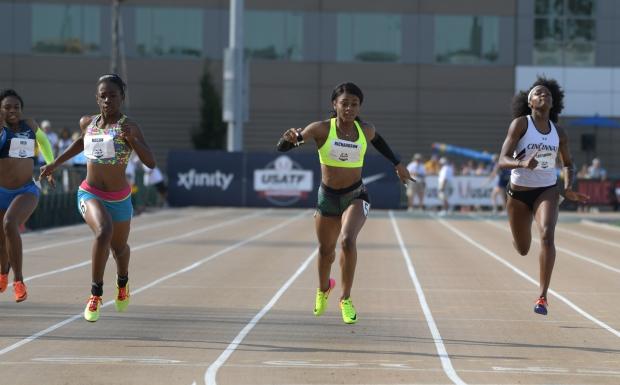 Symone Mason had a stellar weekend at USA Juniors. A day after finishing runner-up in the women's 100m dash behind former World Youth teammate and current Asics professional Candace Hill, Mason won the 200m in 23.09s. The time was the second fastest in her high school career behind only her 23.00 from Bob Hayes. The 4A state champion in the 100,200, and 400m will represent Team USA in Peru in the 100, 200, and 4x100m relay.

"The 100 didn't go as planned," Mason said. "I felt as if I could win it, but I think I was a little too content during race. I ran the 200 exactly how my coaches told me and I came out with the win."

Mason was also slated to run in the 400m dash and decided to scratch that after her runner-up finish in the 100. The Southridge star wasn't even sure she wasn't going to run the 200 as well.

"I knew I'd be in the relay pool and didn't want to kill myself with events," she said. "I know I had a spot on the team, so I didn't go too hard in the 200. I was entered in all three events, but I pretty much had to chose between the 100 and 200 or just the 400 because of how the scheduling went. I was more comfortable with running the 100 and 200 so that's what I chose."

The trip to Pan Am Juniors marks the end of a great high school career for Mason who also won the Adidas Dream 100 in June. It will be her second time representing the red,white, and blue. She was a member of the 2015 World Youth team in Cali, Columbia.

"I'm looking for a great time in Peru with the team," she said. "I've had experience from Colombia so I'm not going over there unaware of how things work. I haven't PR'ed since March so I'm hoping my times will drop. Most importantly, I'm looking forward to making the podium." 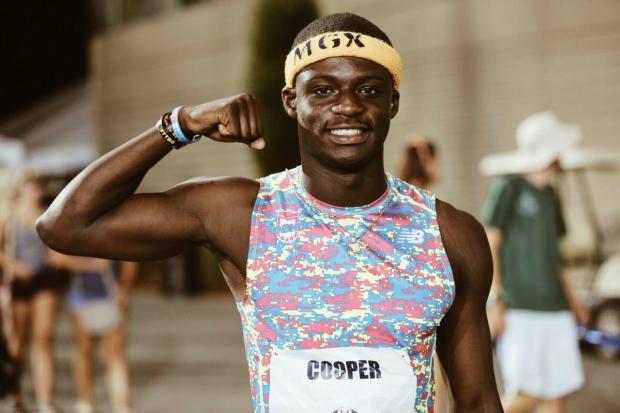 Florida pulled off the 200m sweep with Mason and fellow South Floridian Tyrese Cooper. Cooper started out the weekend in the senior men's 400m dash and advanced out of the first round with a time of 45.45, but failed to make it past the semifinals. Cooper who swept the 200 and 400m titles at New Balance Nationals had plans of running 44s and was clearly disappointed after his race. Coach Darius Lawshea said the decision to run against the seniors was to see what his weaknesses were because he had never been pushed.

"I want to train him to be great, but it's hard to find limitation," he said. "In the senior race he found it and it's a different pain tolerance." 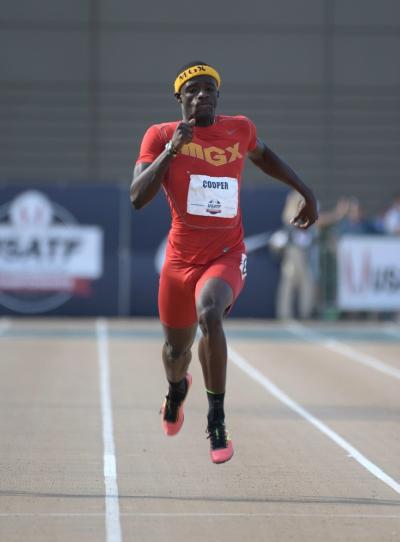 Overall, Lawshea was pleased with how the youngster managed the first round and added that lane one in the semifinals threw him off mentally.

"I feel he should have handled it a little better and not let it get to him," Lawshea explained.

Cooper bounced back to win the junior men's 200m title in 20.89s. It's hard to believe this is the rising juniors first national team.

"Everything is a learning experience so I'm very pleased. We are both still learning and he is only 17," Lawshea said.

Even more impressive than the win was his demonstration of sportsmanship when fellow competitor Maxwell Willis came off the curve and pulled up and fell in Cooper's lane. Cooper went around him, fixed his form, and ended up winning. After the race, he went back and helped him up and cross the finish. 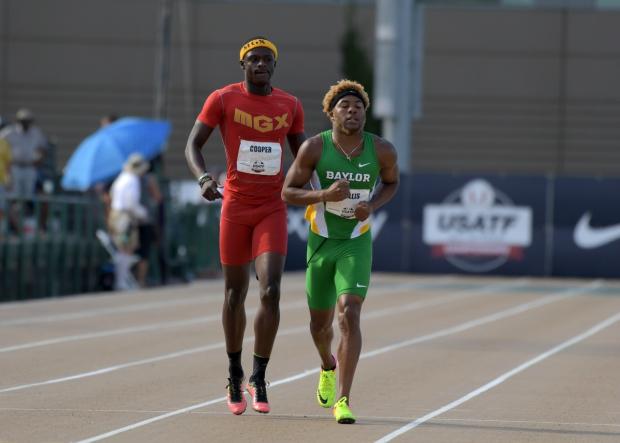 "Tyrese is a superstar in the making, but he still remains humble and always shows great sportsmanship," coach Darius Lawshea said. 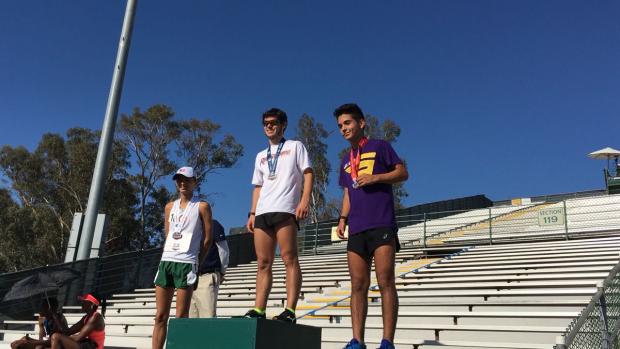 Lake Brantley rising junior Juan Moscoso comes from a race walking family. His sister Maite was one of best in the nation several years ago and both parents compete in age group level competitions. So it's no surprise, the genes carried on to Juan. Moscoso was in Peru just last month for the Pan American Racewalk Cup where he was the first American finisher with a 45 second PR (48:30), but 20th in a field of 30 of the best in the world. The event was his first time representing the USA and he hoped to punch his ticket back to PR at USA Juniors. Moscoso was second in Sacramento in 49:26.22, but told us afterwards he'd be unable to attend the Pan Am Juniors.

"The race went well, not a PR, but still a solid time," he said. "The race went as expected. I was seeded second and finished second. Sadly I won't be able to compete in Peru because of a conflict with another trip I have, and I had to give up my spot on the team."

Moscoso last race walking meet could be the USA vs. Canada dual meet in August.

"This is most likely going to be my last season race walking," he explained. I want to focus more on running because race really slows you down running."

A week after winning New Balance Nationals in the long jump and finishing third in the triple jump, Vanderbilt signee Sophia Falco tested her skills against the best juniors in the country. Falco, cleared 40-9.75 on her first triple jump attempt. The mark held up for fourth place, just missing out on a Team USA roster spot.

One year after winning a 4A pole vault state championship for Lyman, Sean Clarke is clearing new heights as a freshman at the University of Pennsylvania. Clarke finished 15th at NCAA's and ended up 4th at USA Juniors this weekend vaulting 16-10.75.

Other Day Three Florida Highlights Include: