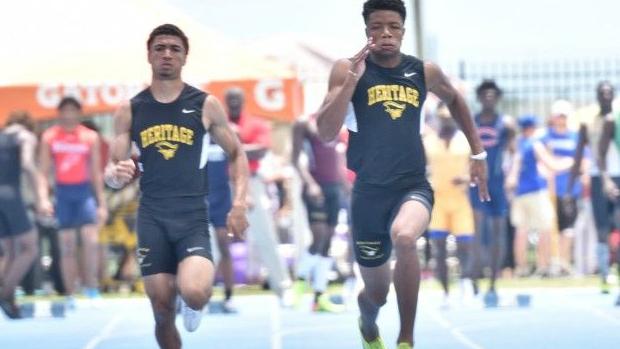 What do two of Florida's fastest sprinters do when the track and field season is over?

For two-sport standouts and American Heritage teammates Anthony Schwartz and Tyson Campbell, they turn their attention to football season. The pair were selected for the prestigious "The Opening" at Nike headquarters in Beaverton, Oregon, which gives the nation's best prospects (166 total) a chance to go head-to-head in drills and 7-on-7 tournaments. (Video courtesy of Andrew Ivins @Andrew_Ivins)

Tyson Campbell and Anthony Schwartz both with 4.27s in the 40 :open_mouth:. pic.twitter.com/zaH0iWM77r

Schwartz, who ran the seventh fastest 100m dash ever by a high schooler and fastest ever in the month of March at the Florida Relays in 10.15 seconds, ran a hand-timed 4.27 second 40-yard dash. Campbell, who stepped up in Schwartz's absence after suffering a hamstring injury at the state meet and won the 100m and 200m dashes, ran an identical 4.27 seconds. It was the two fastest times of anyone in the field.

Just how fast is a 4.27 second 40 yard dash? To put that in perspective, that would be the second fastest in the 2017 NFL draft behind only John Ross of Washington who ran 4.22 and was selected as the 9th overall pick -- 40-yard starts, however, are FAT at the Combine. Since 2006, only Ross, former Central Florida trackster and NFL running back Chris Johnson (4.24), Dri Archer (2014) and Olympian Marquise Goodwin have run faster or as fast since 2014. 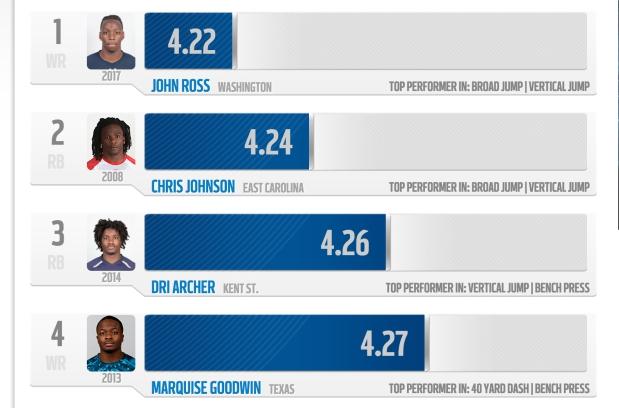 Both rising seniors are listed as four-star recruits by multiple recruiting websites and have dozens of scholarship offers from schools all over the country. Schwartz recently won New Balance Nationals in the 100m and was second in the 200m behind Tyrese Cooper.

He recently was fourth at USA Juniors in the 100m and will be a member of the 4x100 relay team at Pan American Junior Championships in Peru. The Patriots standout has said he would love to do both track and football at the next level.