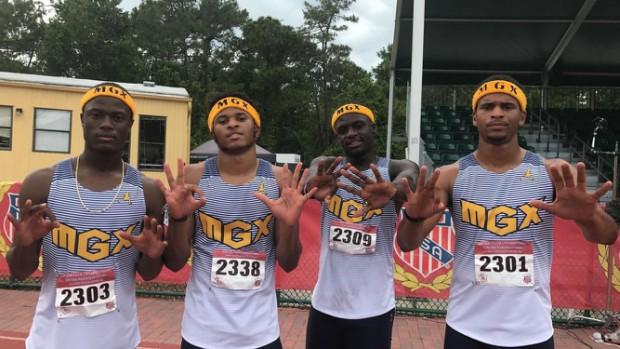 The 4x800m relay started off the running competition for the day.  In the 12 year old boys relay, MGX broke their own seven year record. To make an even tougher blow to the competition, these 12 year old boys beat the 14 year age group as well, due to the combined heat. Lead by 800m and 1500m champion, Jaleel Gelin and Isaiah Scott who split 2:09.58, the boys ran 9:02.48. Watch there interview here:

All week the Jones twins have been dominating the 17-18 year old distance events. From Colin Jones setting the record in the 1500m, to both brothers running comfortable 1:54's to make it to the finals of the 800m. In the 4x800m they split up, with Keaton opening up the relay and Colin closing it. During the race unexpectedly, Elite Athletics of South Florida took over the race and had as much as 6 seconds on the Jones Twins and the Memphis Jaguars. Colin split 1:55.07 to catch Elite Athletics in what came to be a fight to the finish race.

South Florida will have ample representation in the short hurdles on finals day, Saturday. In the 15-16 girls 100mh, Alexis Glassco of Lauderdale Lakes Overtake TC ran the second fastest time overall, running 14.93. Daishon Spann, known for her dominance in the 800m qualified with the 5th spot running 15.02.

Briana Williams and Tamari Davis had a record breaking day out at the AAU Club Championships. In the 14 year 100m, Davis cruised to an 11.91 mark, since she broke the record in the prelims running, 11.63. However, in her 200m she puts out such a strong run to break the record running. 23.58. In her interview she predicts, both of her new records will go down in the finals.

Williams broke the record in the 15-16 100m running what seemed to be a comfortable 11.70. In her 200m dash, she runs 23.92, but isn't completely happy with the result. Williams is also shooting for both records tomorrow. The 200m record which is currently held by University of Miami commit, Symone Mason.

Recently it seems that it's not the AAU Club Championships without something crazy happening during the 4x400m relay. In the men's 17-18 4x400m relay MGX put together the same all-star lineup that broke the Sprint Medley record on Tuesday on the track (Brown, Cooper, Walton, Burns).

When MGX crossed the line with Burns anchoring, the clock read a blazing 2:58.31! Upon seeing the time on the screen, the guys of MGX went crazy and Coach D came running to the track to celebrate. But, a head official cut the party short, telling Coach D that the clock was delayed a whole7 seconds and that the real time was 3:05.31. MGX still beat the previous record by 6 seconds, but they still wish the 2:58.31 belonged to them.