Paul Baur is in his 14th year coaching, seven with Pine Crest, and the previous seven years at Westminster Academy. The Panther girls have been a mainstay on the 2A Cross Country Finals podium finishing runner-up behind Bolles from 2012-2015 and winning championships in both the 2016 and 2017. We caught up with Coach Baur to talk about this year's squad.

We did some pacing work, short intervals and a lot of rest.

Defending our title was definitely a goal that our team has been working towards since the beginning of the summer. I felt confident in the team's ability to make the podium because of the performances at previous practices and meets going into the state meet. The entire girls team was consistent with training and had been performing well during races throughout the season. Most of our girls who were apart of the state championship team returned, so they all knew what they were capable of achieving at the state meet.

We spent a lot of time talking about the game plan for the day before and race day so they knew all the expectations.  We also discussed the course and went over the game plan for each runner along with how we felt the rest of the field would approach the race and what they could expect during the race.  We wanted them to ready for anything and not be surprised on race day. Other than that, they were ready and we did not want to put any more pressure on them than they were already feeling. 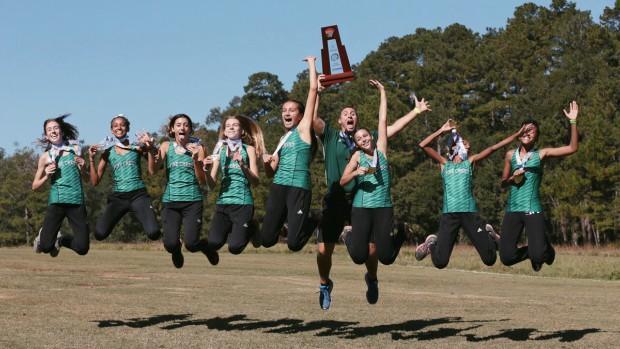 The game plan was to run a nice controlled and relaxed first mile. Due to the downhill start, it is tempting to go out very fast and jeopardize the race, but the game plan was to run relaxed through the first mile and definitely to smile going up the hill! Every chance we get to run on the Tallahassee course, its emphasized to smile going up "the wall!" The team executed the plan perfectly and all of the girls hit the splits that they were planning on for the first mile. This helped them all to have either a SB or PR at the state meet.

It was a total team effort with everyone having a great day.  Tsion winning her second State title along with Maya, Mahdere and Emily placing in the top 7 was very special.  Cassie and Amanda both had season best performances to seal the deal on the championship and Lorrie Axelrod set a PR by 43 seconds to run 20:56 was an incredible performance in her first state meet. We could not have asked for anything more given the goal they had set coming into the meet.

I think the hurricane definitely threw us off our meet schedule and training schedule. It was something that no one had planned for and did not allow us to go to one of the most competitive meets on the schedule. Since school was out for a week and a half, we could not meet up as a team and workout, so everyone ran on their own. Also in the beginning of the season, most races consisted of at least one of the girls feeling sick or having a bad race. Although these challenges set us back at first, in the end, the adversity the team was put through allowed them to become mentally and physically stronger.

Almost everyone went through some individual adversity which slowed down our momentum.  The great thing was that our girls rallied around each other and encouraged everyone throughout.

We do tests throughout the season with 2 mile time trials.  It shows their improvement and helps us adjust their training paces.  Toward the end of the season, they girls ran a 2 mile tempo workout and most of their tempo times were near or faster than their previous time trial.  The looked great and were relaxed throughout so that gave everyone a huge boost of confidence and reinforced to them just how much they improved despite some of the times they had put up in racing. 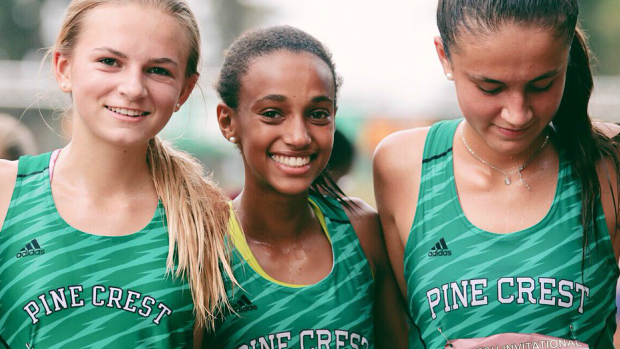 Experienced.  Winning in 2016 showed them what they were capable of accomplishing.  Because of that, they came into this season knowing what it took to win, worked even harder, and were more focused.  They never took anything for granted and were not going to let anyone sneak up on them.  They are a very close group of friends, pushed each other on a regular basis in practice, and enjoyed the process.  No matter the setback, they stayed calm throughout and were confident they would be ready come State.

My assistants complement each of our coaching styles.  They do a great job speaking to each one of our athletes and helping them stay focused throughout the season.  I also rely on them for strategy and input for our training plan.  I don't have all the answers and know they all bring a wealth of knowledge to our team.  The incredible thing is that only one person on my staff ran cross country at any level and it is not me.  Our variety of backgrounds has helped us be able to reach each person and allowed our coaches to make an impact in their own way.

I am very passionate and have high expectations.  I also am a true believer that hard work and adversity build character.  We pride ourselves in learning how to persevere through the bad times and celebrate accomplishments throughout.  No matter who you are on this team, you have the opportunity to make a difference.  Additionally, I do my best to educate our runners on training philosophy and science so they can better understand our total plan.  I want them to give input regarding the plan and how their bodies are responding to the training.

Maya Beleznay, Emily Faulhaber and Tsion Yared made up the core of our leadership.  They worked within their group and with the entire team to help make decisions for the team.  It really gives everyone a sense of empowerment and they take great pride in helping create the culture and direction of the program. 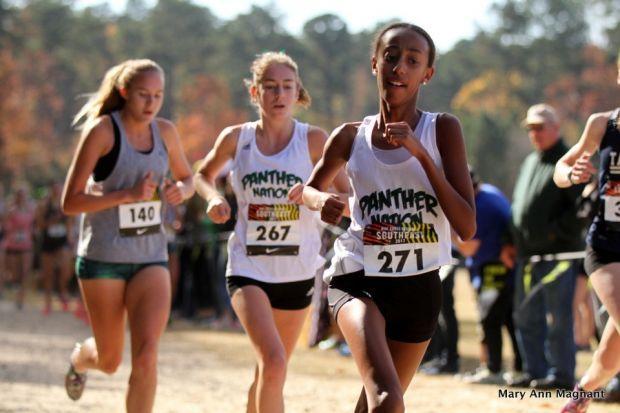 The runner that impressed me the most with their improvements this year is Lorrie Axelrod. Not only is this her second year of running cross country, but she dropped around 4 minutes throughout the season! She has continuously worked hard, since the day she started running and that definitely payed off this season. At almost every race, she ran a PR, consistently dropping her time. I am so excited to see what she can accomplish during the track season and during next cross country season as she continues to impress me each and every day.

This team is an extension of the many great leaders who have helped pave the way for the how this team operates.  None of this team's accomplishments would be possible without those who worked so hard to put processes in place.

Over the course of the season, we had three different girls step up to be our #1 runner.  This team was always there for one another and that was especially true in races.  Their dedication also needs to be noted.  They took pride in everything we did and made their families and Pine Crest proud! 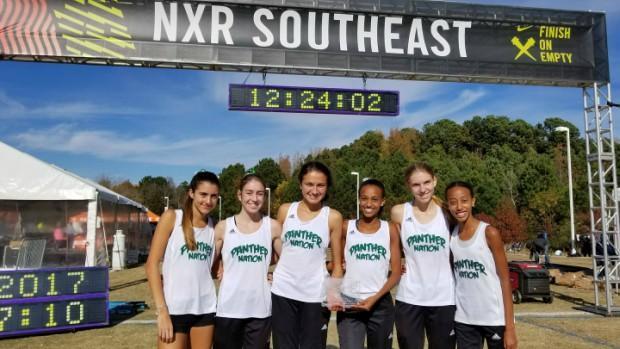 I think that this group has learned a lot from this past season and that will definitely help us prepare for the next season. Fortunately, we will not be losing any runners in our top seven, so we hope to return with an even stronger group, and go for another team state championship! We would also like to qualify for NXN, especially after this past Nike Regional meet when we were only 9 points away from making a trip to Oregon! The entire girls' team is now more motivated going into the next year to accomplish that goal.