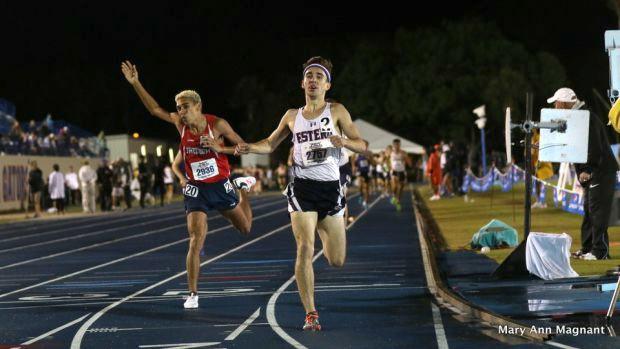 Hugh Brittenham was undefeated in every distance event he ran this year. The Estero junior owned US#1 marks in the 800, 1,500, and 1,600m. To say over the last three weeks, he was riding on an emotional high would be an understatement. This weekend's Florida Relays provided yet another test.

Thursday night in his signature headband, Brittenham, who ran 1:51.92 at the FSU Relays, couldn't find his way to the front early which through off his game plan and made him work even harder than he usually has to. He worked his way up to finish third behind Jacob Miley and James Hasell two guys he defeated in previous weeks.

The loss humbled Brittenham and also gave him motivation for the 1,600m which he'd run almost 24 hours later on Friday night.  He stuck with the leaders through three laps and then it was time to go. With 300m left, he shot out of the curve and held off a late charge from Freedom senior and UNF signee Timothy Doyle to win in 4:13.46.

Doyle's 4:13.83 was a new personal best by nearly four seconds and according to Buddy Collings of the Orlando Sentinel, 8th on the area's all-time list. The top eight runners all ran under 4:20 to make it one of the best 1,600m race of the year along with last weekend's FSU Relays.