And maybe it's as simple as that.

The Plantation American Heritage (FL) graduate still hasn't lost at 100 meters in 2018. On Friday, his latest win came at the USA Junior Championships in Bloomington, Indiana.

From his dazzling semifinal, where the University of Auburn signee ran "an easy" 10.33 (-1.8), to the final, where he made sure to give a hard effort against Ohio State's Eric Harrison to win in 10.23, Schwartz continues to be unbeatable.

This took place, he said, even though he tweaked his quad before the final.

Either way, Schwartz hinted that his amplified success may have started in the winter during the indoor season. He said his work on block starts paid a difference once the spring arrived, and that training continued for another two months.

"It helped me mainly get my start better," he said. "You can still win without a start, but the important thing was the start. I focused on that." 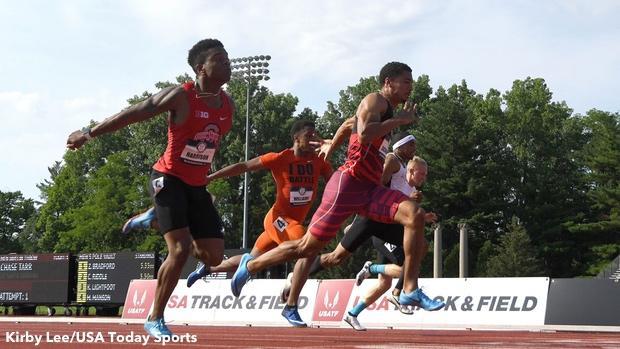 Pressure? At the very least, he has sensed some kind of expectation at some point during 2018. Internally? From others? The media, aka the hype train?

"Just knowing what people expect of me every week," is what pushed me to "want to run fast times," he said.

Sounds simple enough. But that positive makeup continues to work wonders for the sprinter.

"I just try to relax in my races," he said. "If I'm relaxed instead of trying to force a time, I race faster."

And now that Schwartz has officially qualified for the U20 Championships in Finland, he says he's turning his attention to competing against international competition.

"I want to show everyone," he said. "I want to be the fastest person ever."