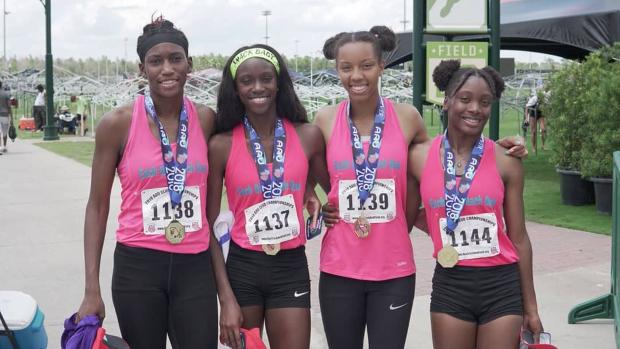 The third day of the AAU Club Championships was one for the record books, and it's only the first day of prelims.

In the premiere event of the day, the 100m dash, there were three age group records broken by six different athletes.

Demi Dunbar, Juliah Bolden and Destyni Devine. These three girls each broke the 9-year old girls 100m dash record during the prelims. Dunbar from Florida Express won heat 5 running 13.97, which initially broke the of 13.99 set in 1999. Bolden, who holds the 8-year old club championship 100m record (14.27), ran two heats after Dunbar and broke her record with a time of 13.59. In the final heat of the prelims, Devine ran a time of 13.57 to secure the age group record until the semifinals on Thursday. Devine not only took down a 19-year old record but broke a 14-year old record for the national title in the 9-year old long jump, jumping of 14-04.75.

That same instance happened in the boys 11-year old 100m prelims. In heat 6, Evan Boykin of Charlotte Heat ran 12.36 to break Willie Washington's record of 12.49 (2014). In the following heat, Da'Vekio Ruffin of La Kream Elite ran 12.32 to hold the record. If both boys advance to the finals it will be a showdown you don't want to miss!

The sprint medley is a relay that is unique to the AAU Club Championships in the summer track circuit. Setting the final record of the day in the 17-18-year old girls sprint medley was Florida's E.O.T.O Elite. The young ladies ran 4:00.91, breaking 2006's record of 4:01.74 from Metropolis Track Club. The record-breaking team consisted of Destiny Charles, Jadea Barrett, Jatana Folston and Daishon Spann.

Folston and Spann are no stranger to the AAU Club Championships. In 2015, they both were a part of the record setting 14-year old girls 4x400m running 3:47.68 (the record still stands). Folston placed third in last year's club championship 400m dash running 55.07. She is now Florida's 2A girls 400m champion running 53.42. She topped her personal best shortly after at the New Balance Outdoor Nationals in 53.04. Spann finished second in the 17-18-year old girls heptathlon this year with 4,284 points. She will be competing in the 100mh and 800m this upcoming week. With this win in the sprint medley, Spann is a 16-time AAU Club National Champion.

There are four days left of competition so, be prepared for some record setting performances! Remember you can watch this event live from flotrack.org. For all things AAU Club Championships, be sure to follow FloTrack and MileSplit on Twitter (@FloTrack, @Milesplit).