Coach Roy Harrison led the HB Plant ladies to their 12th team state title last week at the FHSAA 4A Cross Country State Championship.
The Panthers 2020 4A win makes Harrison the only coach to lead a girls squad to 12 team titles at only one school. This 12th title also puts him at No. 3 for the most state cross country championships won by any Florida coach, just behind Doug Butler and Tony Ryan who have both boys and girls team state titles.
This weekend, the formidable squad ran a very impressive race with 51 seconds marking the time their first runner came through the finish to the time their fifth runner cruised in.
FHSAA 4A Girls Cross Country State Meet Race Replay
Mary Ellen Eudaly led the group with a 19:21, 13th place finish, with fellow juniors Arlie Rubin and Penelope Markowski coming in 18th and 23rd with times of 19:36 and 19:48.
While three juniors led the way for the Panthers, the story of the weekend goes to senior Lily Fitzgerald. She ran a race that allowed for the Plant ladies to take over the podium. Her bright and shiny new PR of 19:57 to finish fourth for her team was her first time sub 20 minutes in her entire running career. She also led  freshman Madeleine Gear to finish right behind in 20:12 for a great fifth place team finish that pushed Plant at the top of the podium.
Earlier this season, Fitzgerald started her season with a time of 21:46. Week by week, she's brought that down and ultimately Coach Harrison had his girls peak at the right time.
After being on the podium in 2018, adding the challenge of COVID-19 throughout the entirety of the season, Fitzgerald knew she wanted to close out her senior year with a bang.
"Every run that we got to do, I'm like okay this is going better me for whatever," Fitzgerald told Fox 13 News in an interview early this week.
Plant scored a total of 79 points to overtake Newsome who finished in a strong second with 92 points.
1991 marks the start of the Plant powerhouse when Harrison captured the first team title. Since then, Harrison has risen in the record books to now the most decorated girls cross country coach in the state of Florida. 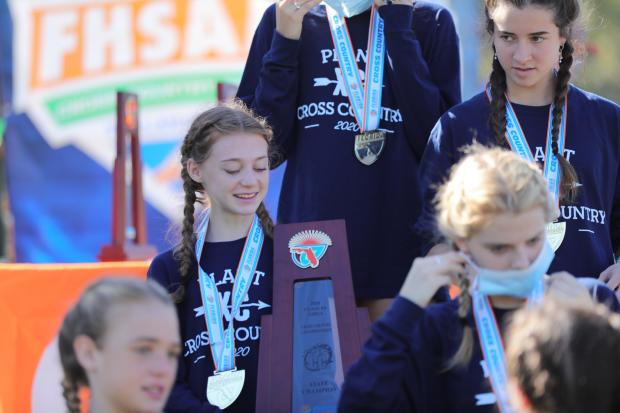 The public school program has a history that takes talent within the area and shapes them throughout their four years of high school. Fitzgerald's success at the state meet this season is a perfect example of an athlete Coach Harrison has developed into a strong competitor at an elite level.
Aside from Fitzgerald, the Panthers lose one senior this year in Hartley Hill, but will rebuild with three incoming seniors next season.
With FHSAA hall of fame coach, Roy Harrison, it will come to no surprise that these ladies will be at the top of the rankings next cross country season as well as they aim to fight for a 13th team title.