McArthur High School's Christal Facey is taking her talents to the Ivy League with her commitment to the University of Pennsylvania.

Florida's No. 2 returner in the 400m chose the Quakers over some of the nation's top schools including Columbia University, Dartmouth, Duke and Georgetown.

"I'm very excited, Penn is like my dream school, it's the perfect school for me to go to," the senior said. "I believe that this school is the best place I can reach my academic and athletic goals... I like the location and the people, the women on the team were kind and welcomed me in, answered any questions I had. I love the environment, it's an environment I can see myself achieving big things in."

Making her commitment official on December 19, the overflow of support she received from friends, family and classmates meant a lot to her.

"All of the love and support I got back from everybody was amazing, even from my school," she said. "Students I hadn't had conversations with before were going on Instagram saying, 'congratulations', how they're proud of me and want to see me do big things. I honestly didn't expect that reaction from everyone, so it kind of shook me and made me really happy."

As a sophomore, Facey made her first FHSAA 4A 400m state final, placing eighth. In 2020, she had a strong start to her junior season, running 55.47 at the Sam Burley Hall of Fame Invitational.

"To still be able to PR at the end of the season, with going months without a track, it really showed me that I have so much potential," Facey explained.

Facey is a strong addition to the Quakers' sprints program. Based on her current PRs, she'd rank No. 9 all-time in the outdoor 400m. With the upcoming graduation of Penn's 400m school record holder Uchechi Nwogwugwu, Facey will be the one to beat.

However, Penn's program is undergoing some changes with the departure of assistant coach, Porscha Dobson, the coach who recruited Facey.

At this time, head coach Steve Dolan organized a Zoom call to reassure Facey and her family that Penn was still the right choice for her. A conversation that secured her trust in the program and decision. 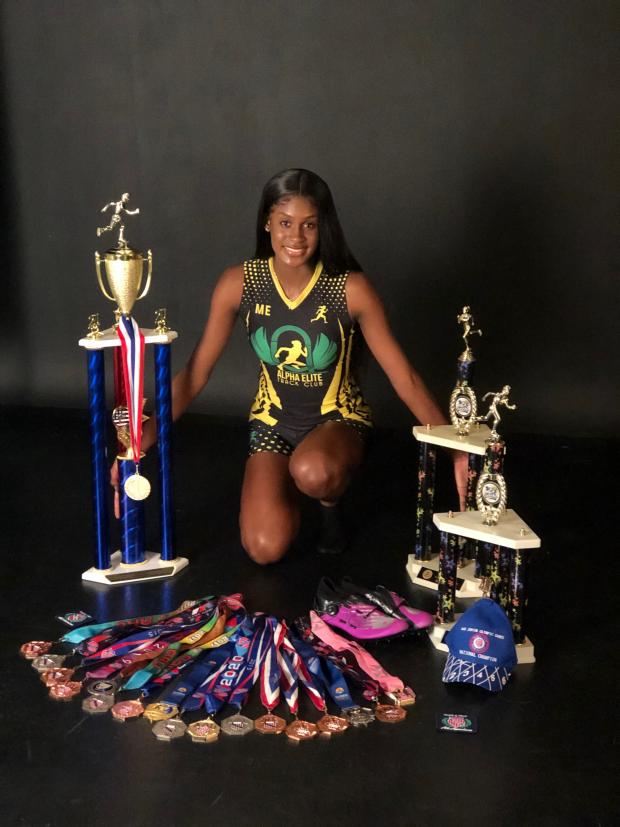 Facey has always had dreams of attending an Ivy League institution. With a 4.6 GPA, she's taken seven AP classes and numerous honors courses while balancing being competitive on the track.

"There were times that after I finish practice, I'm tired and don't want to necessarily come home and study but I know it's what I need to do to reach my goals, so I just have to keep pushing," Facey said. "And in the end, to be able to attend UPenn is really just a dream come true."

By signing to Penn, the McArthur senior will be the first from her school to attend the Ivy League institution. While Facey worked hard to accomplish her goals, she knew she was working toward something bigger than herself by setting a strong example for her younger sister, Christin, an up-and-coming 400m talent.

"I just hope to inspire my younger sister to do the same," she said. "I always want to see her achieve her goals. I also want to inspire other young Black women as well, that they can too do it. That you can be athletic and smart at the same time because I know the stereotype that if you're athletic then you're not very bright. But I just want to prove everyone wrong -- that you can do both."