The race was specifically set up for one goal. To break Florida high school girls' two miles state record of 10:17.20, which had listed since 1979 by Betty Jo Springs of Bayshore High school.

The race would have two of Florida's fastest ever at the 1600 and 3200-meter distance in Cambridge Christian junior Mary Ellen Eudaly and Caroline Lehman working together to chase after the same record.

The two runners were originally planning to train thru the month of May for post-season meets at Running Lane Championships in Alabama in June and Brooks PR Invitational in Seattle In July.

After they ran such an impressive workout the other week doing two 3200 meter repeats at 10:45 then 10:33, their coach Ray Friedman decided their fitness and sharpness at the time need to be tested much sooner in a race situation and entered them both for the final Golden South Series #3 at Lake Region High School in Winter Haven, Florida. Aiding to their record chase would be having the Florida boys' state record holder in the 3200 in Nease High's Rheinhardt Harrison pace them throughout the race. The word got out early in the week that meet management was looking for someone two help pace the two girls towards the state record time and Rheinhardt Harrison answered the call just like he did when helped pace his teammate Anderson Ball to a sub 9-minute race.

Competing in a mixed co-ed race at Golden South Series #3 on Saturday night that they would have finished second and third overall behind boys' champion Ryan Sarafoglu (9:58.52) and ahead of the rest of the male distance runners in the field, Lehman and Eudaly gave chase. 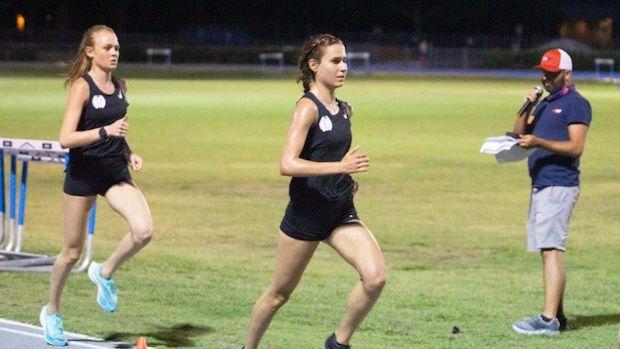 During the indoor season, Lehman had a very impressive campaign setting the Florida indoor state record for two miles at 10:20, while winning the adidas Indoor Nationals 5K title as well in a 16:53 PR.

Eudaly, who was transitioning from different teams and coaches over the year, really started to hit her stride early in the outdoor season running a 10:17 PR ahead of Lehman at the Dash for Doobie 3200 meter race and consistently finished ahead in the majority of the 2021 outdoor season races ahead of Lehman as they both worked together to run well under 4:50 for 1600 meters. Eudaly topped out at 4:44, while Lehman lowered her 1600 meter PR to 4:46.

In the FHSAA championship series, Eudaly shifted her focus down to the 1600 meter run, while Lehman stayed running the 3200's en route to a 1A state individual title in the event. In Saturday's race at Lake Region High School for Golden South Series #3, Lehman was able to establish herself early running off Rheinhardt Harrison as their pace. After they all went thru the first mile in 5:06, Eudaly began to slip off of Lehman and the pacing Harrison as well as the goal state record pace.

Lehman was able to stay in contact with Harrison setting her up to go after the record at 8:55 total time with a lap to go when Harrison then peeled off the track to let Lehman finish it off. She crossed the line in 10:14.86, which bested the old record by nearly 2 1/2 seconds and also happens to be the fastest full two miles performance in the country this outdoor season. When converting 3200-meter times, Lehman ranks 11th fastest overall combining times from both distances.

Wells, Lehman, and Eudaly will all get a chance to face off two weekends from now at 3200 meters in the Running Lane Championships in Huntsville, Alabama. Since the distance contested at 3200 meters, the record likely will still stay in possession thru that weekend and instead will be an assault exclusively on the 10:10.39 3200 state record by Wells.

With all 3 girls being juniors, do not be surprised if the 3200 and two-mile state record get broken multiple times over the next year. The 3200-meter record went down earlier in the season by Wells and Lehman owns the indoor and outdoor state records for the full two miles distance.