Winter Springs senior Caroline Wells in only her second race of the 2021 cross country season posted the fastest Florida high school girls 5K time ever run in a cross country meet with her 16:40 victory on Saturday morning at the Hagerty Invitational on Oviedo.

On the flat three-loop course on the school grounds of Hagerty High School, Wells thought she was running a fairly controlled and not all effort race, but with decent weather and course conditions, the recent Stanford commit shocked us all including herself when she crossed the line with the historic all-time great time.

The performance just adds to a legendary resumé that she is building before she graduates this spring to firmly be labeled as the greatest Florida high school girls distance runner of all time. She already owns state records in the 3200 meter run at 10:08 and 5K on the track at 16:16. She likely will have a good shot at breaking 4:40 in the mile this spring as well and chase after Caitlin Collier's 4:36 state record in the event.

There is still more to accomplish for Wells including measuring up against the nation's best at the season's end at Foot Locker Nationals as one of her major goals. She was a national runner-up in the outdoor season in the 5K at the outdoor national championship meet in Eugene, Oregon. 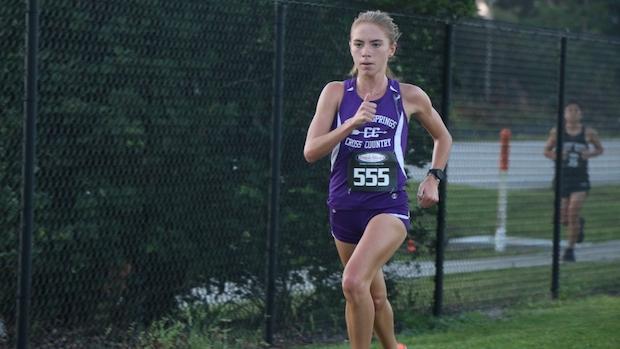 Wells is also helping to bring along her Winter Springs squad, the reigning 3A state champions. The team started off slow and back in the field at the Astronaut Invitational in the season debut race for Wells, but the team showed themselves much stronger at the Lake Buena Vista Invite last weekend without Wells and then even stronger at the Hagerty Invitational with the team win. Despite having just accomplished something so great individually, the first thing Wells did after coming thru the finish line chute was head down the final straightaway to cheer on her teammates to come across the finish as well. Always a team-first individual despite being an elite caliber talent.

Winter Springs girls won the team competition with 50 points and a 19:47 team average despite a top 5 spread over 4 minutes, but have to cut their fifth runner some slack trying to close the gap when the team has a #1 runner in Wells that would have placed fourth overall in the varsity boys race with her time if she competed.