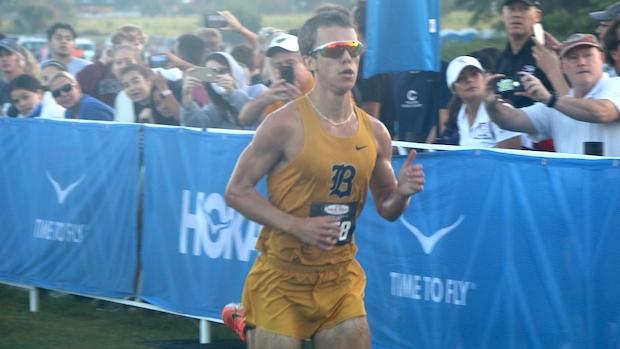 It was a big day for Belen Jesuit senior Adam Magoulas. Magoulas defeated one of the deepest fields assembled for the 2021 cross country season in Florida at the HOKA flrunners.com Invitational's Race of Champions with a course record performance of 15:30 at Holloway Park in Lakeland, Florida. He then let everyone know where he will be attending college next year. Magoulas has committed to the University of Florida, where he will join his old Belen Jesuit teammate and last year's flrunners.com Invitational Race of Champions winner Javier Vento. The Gators had a huge recruiting class of top in-state boys distance talent from this past spring's 2021 graduating class and adding Magoulas is a great start to their class of 2022 group.

The #2 ranked runner overall in the state of Florida, Magoulas kept his undefeated streak alive this season while racing against quite a few runners who are currently ranked or at some point this season have been ranked among the state's top 25 best. An incredible top of 13 runners broke 16 minutes in the race, which doubled the prior number of runners that had broken 16 minutes on the challenging Holloway Park 5K course layout at 13 runners in prior meets over the years. The Belen Jesuit boys have been mainstays at flrunners.com Invite since the early years of the event now going on year #22 and showed their might once again at the showcase event winning the Race of Champions by a significant 53 point margin over 2A state title contenders Berkeley Prep with a team score of 88 points and 16:10 team average at Holloway Park.

The sophomore Joshua Ruiz joined teammate Magoulas under 16 minutes at Holloway with a very impressive time of 15:44 and high finish of fifth place. Rounding out their top 5 team scoring was Evan Torres in 22nd place at 16:17, Joey Diaz-Quintero in 41st at 16:37, Diego de la Hoz in 6th at 16:42. Even more impressive was their "B" squad outside of their varsity lineup currently winning the Jason Byrne Invitational race to follow the Race of Champions division by an even bigger margin than their "A" squad at a 93 point buffer in a 32 point field with a tight 22-second pack for essentially runners #11-15 on their squad as teams were allowed to run up to 10 runners in the varsity races. The depth didn't stop there for Belen Jesuit as it was a train of yellow singlets coming into the finish for the JV boys race at the end of Saturday as well with their squad taking 8 of the top 9 places in the race led by race champion Joseph Ruiz in 17:35.

All in all an extremely successful day for Coach Frankie Ruiz's squad making the trip once again from Miami at another flrunners.com Invitational and bringing back three first-place team trophies home.