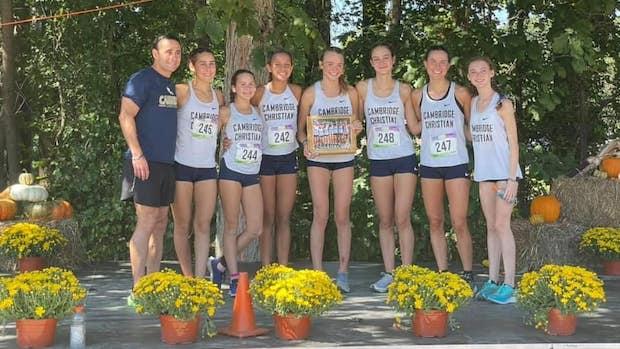 The Cambridge Christian girls made a last-minute trip to compete in the Race of Champions at Great American in Cary, North Carolina this weekend after feeling overlooked in national rankings up until this point including MileSplit's own not even being given an honorable mention despite being the top-ranked team in Florida.

After their results on Saturday, it will be tough to keep them out of the top 25 rankings and certainly out of any regional rankings for the Southeast region. Obviously, the landscape has drastically changed over the last weeks with the cancellation of the Team Nationals event in Oregon and now the rise once again of the RunningLane National Championships set for December 4 in Alabama.

So the trip was still very much a toss-up over the last two weeks if worth it if the only post-season option to push for would end up being just individuals onto Foot Locker South, which Cambridge Christian has three elite athletes in Mary Ellen Eudaly, Caroline Lehman, and Eliana Black to consider that event as well. They were about to opt to cancel their travel flights to Carolina and stay local this week for the HoKA flrunners.com Invite, but ended up keeping their original travel itinerary.

Competing near noon on Saturday as the Race of Champions at Great American is contested near the hottest time of the day, Cambridge Christian finished runner-up in the team competition and just four points off the winners from Weddington of North Carolina. Weddington has been ranked as high as #23 in some national rankings. Cambridge Christian was also 19 points ahead of a fourth-place squad in Morgantown of West Virginia, currently ranked #21 in the MileSplit Flo50 rankings.

Both Lehman, still working back from a summer injury, and Eudaly, who was racing under the weather due to illness, did not race as well as they potentially could in another similar race opportunity at full strength, which could present itself in the post-season at the RunningLane National Championships. Their fifth runner situation will also be a continued work in progress, but Spadaro is now much closer to sub 20 than ever before in that role.

Cambridge Christian was not the only team from Florida represented at the Great American XC Festival as the Bolles boys, ranked #4 in the state overall, finished a very respectable fifth place in the Race of Champions for boys against a field with many of the very best squads in the entire Southeast region. Aidan Ryan continues to step up as of late to lead this squad with his second straight career sub 16-minute race in as many weekends following up his time barrier-breaking run last week at Katie Caples Invitational to finish 25th overall with a personal best time of 15:50. Neither Aidan and dad were home and instead out of state this weekend, but in different states with his father in coach, Tony Ryan guiding the Bolles girls to a team victory in Georgia on Saturday as well.

A fairly senior light lineup too that will be likely more formidable next year with only Duhnoski and Brady not graduating this spring. It is actually interesting to note in another race at Great American in the varsity blue division, two Bolles runners in Matthew McClure with a time of 16:33 for fifth place and Miles Rivera with a time of 16:46 for 12th place ran times that would have been good enough for their varsity squad in the ROC. An encouraging sign for McClure in his first race of the season after running 9:31 for 3200 meters this past spring and expected to be one of the team's top runners this fall.

They were only single digits away from beating head to head the defending 2A state champions from Satellite last weekend at Katie Caples Invite, despite having a key runner not finish the race and their races at Great American certainly indicate a squad prime to compete for the state title in the last half of the season. Ryan has started to separate himself a bit from his teammates as the clear #1 runner, but can one or two of his teammates step up to close the gap and join him back in the 15-minute range for future races?

While the trip for both Cambridge Christian girls and Bolles boys was originally to be a course preview for a potential return to Cary in November for a Team Nationals regional qualifier, both squads come away feeling good about how they are at least standing among the best teams in the entire Southeast region.