Montverde Academy sophomore Michelle Smith is arguably one of the most versatile athletes in the state of Florida right now. Currently ranked US #3 and the state leader in the 300 meter hurdles with a 41.86 personal best from the Louie Bing Invitational earlier this season, Smith has the range to run as fast as a 12.34 PR yesterday in the 100 meter dash to running a 19:20 5K best in her first full cross country season this past fall and the Citrus League champion as well as a top 20 finisher in the FHSAA 2A state cross country race. A native and born in St. Croix of the U.S. Virgin Islands, Smith comes from an incredible track family pedigree with her father Keith Smith being a 1992 Olympian in the sprints for the U.S. Virgin Islands, while her mother Mirielle (Sankatsing) Smith was an NCAA National champion with a 2:03 best in the 800 meter while attending Eastern Michigan University. Her father is also the current president of the Virgin Islands Track & Field Federation as an important figure and promoter for the sport within the U.S. territory and Caribbean islands that make up the United States Virgin Islands. Both of her older siblings ended up coming to the mainland United States to go to school for college and high school including her sister Mikaela, who ended up living with another family in Tennessee for a senior year of high school before receiving a scholarship to run currently at Austin Peay University in Tennessee.

Her father coached and ran a track club with his children including Michelle participation as a youth that would not only organize events on St. Croix, but sponsor travel to larger competitions in Puerto Rico, other parts of the Caribbean, as well as several trips to the United States.

There were certainly many obstacles and challenges over recent years that limited Michelle Smith's opportunities to compete. In the same month and less 2 weeks separated two Category 5 Hurricanes in Hurricane Irma and Maria devastating the Virgin Islands. While the first hurricane that rolled through the islands in Hurricane Irma had a more direct hit on U.S. Virgin Islands in St. John and St. Thomas as well as nearby British Virgin Islands, the second hurricane would really wreck havoc on Michelle's home and island of St. Croix in Hurricane Maria.

Smith recalls the story in our interview of how it was only her father and herself at their home and in St. Croix when the hurricane hit with her mother and both siblings stateside. The two were literally holding the door of their home being blown over when the roof was then blown off their home. They live in a more rural and isolated area on the island and had to spend a week just chopping downed trees and brush to get out following the storm.

Recovery and rebuilding took them and the U.S. Virgin Islands a while after the rare direct hit of such a powerful hurricane. Fast forward to 2020 and nearly 2 1/2 years since the hurricanes when the coronavirus pandemic hit the entire world and shut down sports and everyday life specially in the Virgin Islands.

With their barely adequate healthcare system, the local governments enforced strict social distancing measures, curfews, and travel was screeched to a halt to avoid the spread of the virus from other parts of the world to a popular vacation destination as the U.S. Virgin Islands and St. Croix.

Home schooled and virtual schooled without track meets happening to compete in locally or even ability to travel anywhere that might have events and get back home was extremely difficult for Michelle Smith for a good period of time in 2020.

Once some restrictions began to ease with the economy and travel safely opening back up, Smith once again found herself competing in meets in 2021 locally and abroad. Given her dominance over her local peers though and limited resources and exposure for potential college programs, there was a clear need to find a better environment and attend school, live, and compete in the mainland United States. 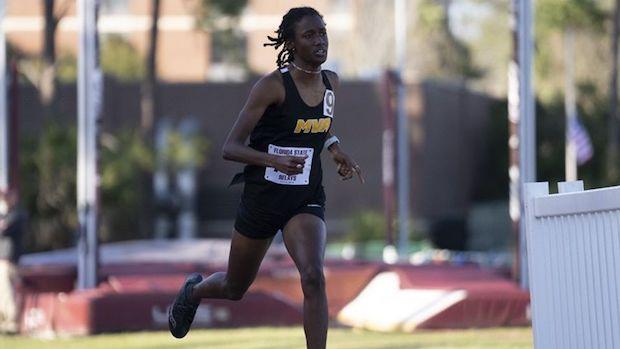 Her old sister Mikaela had actually considered moving to Florida in high school and attending IMG Academy before ultimately finding her way to Tennessee to compete at the high school and college level. When looking at Florida boarding schools as an option for the older sibling is when the Smith family also discovered another boarding school that could meet their daughter's academic, athletic, and housing needs in Montverde Academy, a FHSAA 2A boarding school in Lake County, Florida.

To say that Montverde Academy has been a perfect fit and home for Michelle Smith would be an understatement. She has simply thrived from day 1 upon arrival under the direction of her coaches including head coach Gerald Phiri and assistant coach Jean Carlos-Arroyo.

She impressively embraced cross country this past fall to become the top female cross country runner on the team despite not having never run longer than 2 miles prior to arrival at Montverde Academy. She defeated all the top runners in the Citrus League Championships to win her league title this fall and broke 20 minutes for 5K in a consistent number of 7 total races this fall with her best time coming in a 19:20 performance at the FSU Pre-State Invitational. She was only 4 spots away from being All-State finisher in cross country with a 19th place finish in the FHSAA 2A state race.

She has also thrived being part of a program that has had a pretty aggressive and busy meet schedule showcasing the team's top athletes at some of the premier meets on the East Coast including several trips to indoor meets in Alabama, New York, and Virginia. Believe it or not though, despite growing up in the Caribbean, Smith was no stranger to indoor track as her father and their track club had traveled in prior years to indoor track meets in Tennessee and Alabama for her initial exposure to running circles around a track with a roof over it.

Smith earned All-American honors twice at 400 meters with a 4th place finish at the Nike Indoor Nationals in New York at 55.30 as well as 3rd place PR time of 55.19 at the adidas Track Nationals in Virginia.

She quickly transitioned back to outdoor track in Florida after traveling and racing two straight weekends in March indoors up and down the East Coast competing with her Montverde Academy squad at the FSU Relays in Tallahassee following the meet's two year hiatus without high school events. On the first day of high school competition, Smith was able to pull away from the seeded section of the girls 800 to win in a new personal best time of 2:12.25, which ranks 4th fastest overall in the state of Florida. She would double back on the next day to win the 300 meter hurdles comfortably in a time of 42.30.

Given her strength to run as far and fast at the 5K in cross country and the speed to run into the low 12 second range for the 100 meter dash, Smith should thrive at the 400 meter hurdles. She will actually be competing in the event in a few weeks in Kingston, Jamaica for the 2022 Carifta Games against the very best youth of the entire Caribbean representing her home of the U.S. Virgin Islands. Will be exciting to see if she can push for a time under 60 seconds at the Carifta Games. Only six high school girls broke 60 seconds last year in the entire United States.

Before the Carifta Games and immediately coming up on Thursday for day 1 of the Florida Relays in Gainesville, Smith will showcase her amazing versatility when she comes in the 100 meter hurdles at 6 PM as the current #13 ranked hurdler in Florida with a 14.64 season best and doubles back 30 minutes later on University of Florida's track in the 800 meter run fresh off her PR in the event one week. She will have two of the top three ranked athletes in the state seeded ahead of her in Samantha Kavanagh of Northeast (FL #1 2:10.93) and Layla Haynes of IMG Academy (FL #3 2:11.99).

Haynes and Smith have very similar stories and paths coming to Florida from Caribbean Islands after being age group track stars growing up with Haynes as a native from Barbados. Their paths have likely crossed before in meets and will certainly cross again many times more in Florida and international competitions if Smith sticks with the 800, which is becoming the specialty for Haynes at IMG Academy.

Smith is so good though, she can pick any event or distance that she wants to focus on and she will be great.