Montverde Academy junior Zyaire Nuriddin became only the 8th Florida high school athlete according to our own MileSplit database to break 46 seconds in the open 400-meter dash on Friday at the Florida Relays as he lowered his own national leading season and personal best in the event with an astonishing 45.78 performance.

Nuriddin has been on a tear over the recent month including a US #3 all-time indoor performance in winning the event with a 46.04 performance at the adidas Indoor Nationals two weekends ago in Virginia Beach, Virginia. 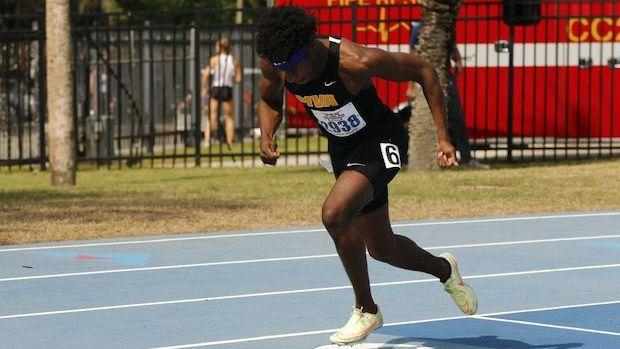 After that run indoors, it was only a matter of when not if that Nuriddin would dip under 46 seconds during the outdoor season. It happened in Gainesville on Friday morning in a race that many of the state's other top-ranked 400-meter athletes had opted not to enter the Florida Relays in the 400 such as King Mack and Mekhi Gammons with only one top 10 ranked in Florida slated to compete in Boone's Aidan Mizell.

It would be Mizell as the only one to put up some form of a challenge and push for Nuriddin as the sub 48-second performer Mizell was just off Nuriddin's right shoulder to the lane to his outside coming off the final turn.

The last 100 meters of the race though, Nuriddin turned into an open 100-meter sprint turning on the jets with another gear to drive it home for his first and the nation's first sub 46-second performance this season for the high school boys 400. Mizell would hold on for a breakthrough time himself in second place at 46.99 as Florida now remarkable has 4 juniors who have broken 47 seconds in Mizell, Mack, Gammons, and Nuriddin.

After being a state champion last spring in Delaware as a sophomore with a 48.05 personal best, Nuriddin has improved remarkably by over 2 full seconds in his new surroundings, training, coaching, and team in Florida at the Montverde Academy.

With still two and half seasons of high school track seasons to go if you count the full indoor season schedule that Montverde Academy will likely replicate next winter from this past, Nuriddin has time to continue drop his times towards the 44.99 state record by Jamal Walton of Miramar from 2018 as well the #2, #3, #5 all-time performances in state history by the likes of Tyrese Cooper at 45.23 from 2016, Xavier Carter at 45.30 from 2004, and Arman Hall at 45.39 from 2012.