Florida highlights from the third day of the 2022 adidas Outdoor Nationals in Greensboro, North Carolina on Sunday, June 19th.

Michelle Smith dominated the championship girls 400 meter hurdles as the sophomore from Montverde Academy and native of St. Croix, US Virgin Islands turned in another sub 60 second performance to follow up her victory earlier this season at the Carifta Games in a 59.96 victory in Greensboro.

Brandon Pottinger of Palmer Trinity School won the adidas Indoor Nationals title in the high jump this winter and did the same at adidas Outdoor Nationals with a successful winning clearance of 2.05 meters or 6'8.75". He will be jumping many times in the future in Greensboro as a North Carolina A&T commit. Damoni Kelly claimed a national title as well for Florida in the field events as the the senior for Mandarin took the lead in the championship girls shot put with her opening throw of 13.01 meters and expanded upon that lead on her fourth attempt at 13.45 meters or 44'5".

Aliyah Robertson, another All-State thrower for Mandarin, finished third in the national elite division of the girls shot put with a mark of 12.06 meters on her fifth attempt. 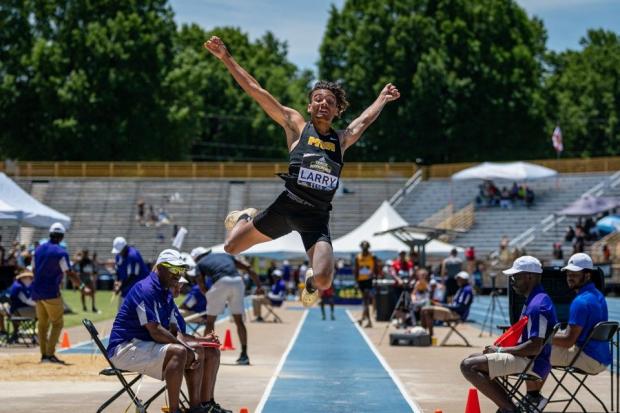 Jumping into a -2.6 m/s headwind, Montverde Academy junior Micah Larry won the championship boys long jump title at adidas Nationals with a leap of 7.28 meters or 23'10.50" on his final attempt. Well off his personal best from when he set the state meet record in May at 7.9 meters or 25'11", but enough to easily secure a national title in Greensboro for the returning star for Montverde.

His teammate Kyle Johnson was runner-up in the national elite division of the long jump at 6.84 meters behind another Florida athlete and event winner in Taravella's Elijah Rowe with a top performance of 6.88 meters.

State champion at 400 meters this spring in 4A, Mandarin senior Terren Peterson focused on the 200 meter dash at adidas Outdoor Nationals and earned All-American honors with a time of 24.66 for fourth place.

The Leon boys competing under Tallahassee Zoom claimed third place in the finals of the championship boys 4x100 meter relay with a total time of 42.51 from their four relay legs.

Lake Mary junior Markel Jones was a state runner-up this spring in 4A for both the 110 and 300 meter hurdles and on Sunday earned All-American honors in the 400 meter hurdles with a 55.34 personal best performance.