Vote below by Friday at 9 PM for the most deserving based on last week's performances as Florida boys XC performer of the week.

The nominees include Patrick Koon of Leon, Alex Pena of Sunlake, Evan Crane of North Port, Colton Lawson of The King's Academy, Graham Myers of Fleming Island, and Jonathan Leon of Hagerty. 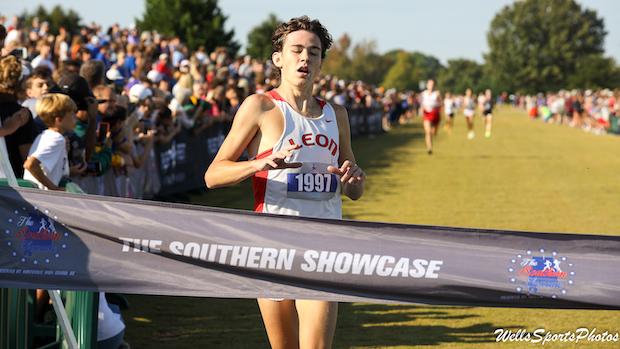 Koon ran the second fastest high school 5K cross country time ever recorded in Florida high school history while being a national class field at the Southern Showcase in Alabama with his 14:43 victory. He was only 2 seconds off the all-time best performance by Michael Toppi on the same course in Huntsville last December at the RunningLane Championships. Pena had the top time among the two day of races at the Spanish River Invitational leading his Sunlake squad to a big win as well in a new personal best time of 15:30 in the 3A/4A race with familiar Pasco County rival Zack Poekert 11 seconds back in second place at 15:41. Pena decisively pulled away in the final mile of the race.

In the Friday 1A/2A races at Spanish River Invitational, Lawson was able to outlast a 1:52 half miler in David Serra of Ransom Everglades in a kicker's finish to win with a new 5K personal best effort of 15:45.

One of the biggest surprises and out of nowhere victories of the weekend came at the North Port Invitational with Evan Crane shocking a field full of highly ranked and well known runners to drop nearly 30 seconds off his 5K PR to win the elite race with a 15:47 finishing time. The majority of the top runners in the Jacksonville area raced at Bartram Trail's Bale-N-Trail race this past weekend and Graham Myers proved to be the best of them all taking the race in a time of 16:03 and nearly leading his Fleming Island squad to an upset over FL #2 ranked Creekside as they were only 5 points off them. After watching his former teammate Brayden Seymour set the school record in last year's Hagerty Invitational with a 15:32 win, junior Jonathan Leon nearly took down his school and home course record with a 15:37 personal best victory this past Saturday at the Hagerty Invitational dropping 26 seconds from his performance last fall in the same race.

Who was the Florida boys XC performer of the Week (Sept 12th-17th)?