Workout Wednesday visit with the Christopher Columbus boys, who have historically been one of the better programs in South Florida and only two years removed from winning the 4A state cross country team title in 2020. With a young squad last year, Columbus still managed to finish 4th in 4A during a rebuilding or reloading year and return that core back to certainly be one of the teams in the classification in the running to be one of the two podium teams. 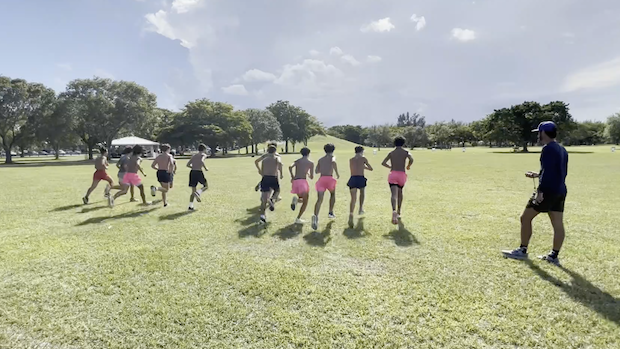 At the Spanish River Invitational this past weekend, Columbus got their top 5 all under 17 minutes with a 16:34 team average to finish as a close runner-up to Sunlake (46 pts to 55 pts) in the 4A team standings. Alejandro Romagosa leds the squad with a 16:06 best and took charge and the lead early on at Spanish River to show himself as an emerging front runner of a team that primarily thrives on the pack. Daniel Garcia (16:27), Mario Sueiras (16:30), Giovanni Armas (16:49), and Mateo Sotelo (16:57) were all under 17 minutes, but the team is not even at full strength with the talented runners not currently inside their top 5 including 1:53 half miler Marc Dabby and sophomore Anthony Scarcello as their current #6 runner, but was last year's GMAC champion and ran 16:36 last fall as a ninth grader.

The margin of error is certainly tight between them and the current top 4A ranked team Creekside as well as other contenders with 5 under 17 minutes in Niceville and Nease among other highly ranked teams in the classification.

Their next event is this Friday at the GMAC Championships, which they should dominate and nearly perfect score among the other top Miami schools and runners in the conference. Their current head coach is an alumni of the program and not far from his days competing for the Hellions in Danny Areces, who has quickly proven despite his age that he is very capable of knowledgeable in the position taking over the storied program from his predecessors.

The workout for the Columbus boys on our visit after their season opener at the King of Hill Invitational was on the same course at Tropical Park where they ran 5x1000 meter repeats around 5K race pace and followed that workout with another workout hitting the "Hill" at park for some repeats in loop that the runners went over the crest twice.